No Bang for the Education Buck — Iowa and the Nation

Our children’s education has been a national concern practically since the nation’s founding. In 1788 the Northwest Ordinance decreed that “schools and the means of education shall forever be encouraged.” Over the last 40 years or so, that encouragement has taken the form of upward spiraling educational spending, much of which was needed to pay for thousands of new school employees.

But according to a recent study by the Cato Institute, that increased spending hasn’t produced dramatically improved outcomes. Using a matrix which compares aggregate SAT scores state by state compared with their spending trends, researcher Andrew J. Coulson found that test scores in most states have remained flat or slowly declined. Even in cases with lengthy declines in spending – Coulson cites Alaska, California, Florida and New York as examples – there was a lack of correlation between spending and results.

Granted, the SAT isn’t a perfect example of academic prowess. Yet in most states the SAT is usually only taken by college-bound students, whom one would expect to be the best and brightest. Knowing our top academic achievers have a stagnant performance on an important college assessment doesn’t bode well for average students.

The problem with this result is that it punches yet another hole in the theory that the cause of our failing education system is the lack of funding. In the last 40 years we have adopted new curricula, shaved the classroom size from about 30 per class to 20 or so and spent billions on new school infrastructure. Yet none of it seems to produce measurable results. The highest achievers today are the ones taught outside the public school system, whether they’re homeschooled or attend alternative parochial or charter schools. Those parents, and others with no children in school, bear the brunt of the additional educational spending. The only ones who seem to be happy about it are the government employees for whom mediocrity is job security.

From Coulson’s introduction to the Cato study

Using a time-series regression approach described in a separate publication, this paper adjusts state SAT score averages for factors such as participation rate and student demographics, which are known to affect outcomes, then validates the results against recent state-level National Assessment of Educational Progress (NAEP) test scores. This produces continuous, state-representative estimated SAT score trends reaching back to 1972. The present paper charts these trends against both inflation-adjusted per pupil spending and the raw, unadjusted SAT results, providing an unprecedented perspective on American education inputs and outcomes over the past 40 years.

From the Cato study, the chart for Iowa; 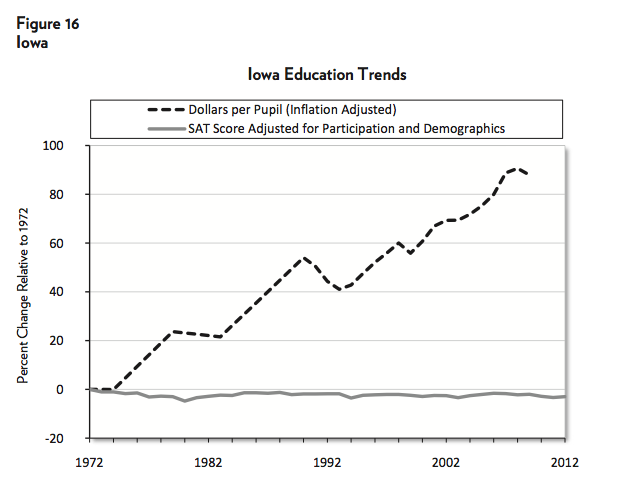 Too many Republicans were unprotective of  taxpayers and more fearful of teacher union political threats when they fell all over themselves to “support teachers” a few years ago when the usual suspects  trumpeted an irrelevant study that teachers in Iowa were being paid an annual salary ranking them 42nd in the nation. It was a teachers union supplied figure unadjusted for cost of living that was swallowed whole hog.

In fact, when compared to the plain states region, the standard of comparison for Iowa on cost of living related matters, Iowa’s teachers were compensated then at a rate $200 from the top state in the plains states region. Iowa was certainly not as stingy as the unions intimated but which Republican candidates like Roby Smith said amen to, criticizing those few Republicans who stood up to the teacher’s union.   And what did we get for the increases in spending?  Cato informs us.   R Mall