Governor Branstad paid a visit Thursday to Victory Enterprises, a political consulting firm located in Davenport headed by Steve Grubbs.  There are ironies,  contradictions,  puzzlements, or worse, confirmations related to the visit to that particular business.

As we have pointed out before there is an obvious similarity between the logic and theme of an attack by Democrats on Governor Branstad just prior to his 2010 contested primary and that used by Steve Grubbs /Victory Enterprises  / Roby Smith in their campaign against conservative incumbent State Senator David Hartsuch. Both examples were misleading smears and distortions, prime examples of Illinois style politics.  Both efforts were intended to suppress the vote for the leader going into the primary.  Both were also intended to hobble the target going into the general, should the target prevail in the primary.

In primary contests, because only a portion of the party’s electorate shows up, one need only move a relative handful of votes in order to achieve the primary goal. Grubbs’ Smith was behind, and had to do something dramatic and eleventh hour so as to preclude the truth from getting out in time. Smith / Grubbs ended up winning by only 180 votes so they only needed to turn half that from Hartsuch or in combination add a few and detract a few. The grotesqueness of what they did is thoroughly explained by accessing the page link above titled Shameful.

If the attack, also exhibited below, on then State Senator Hartsuch was not a smear or distortion, then neither was the attack on Governor Branstad. The logic used in both is of the same ilk.  A position in defense of civil liberties is distorted to be support of a nefarious thing.  It is inescapable by their logic. Grubbs /Smith must think Governor Branstad wants to put guns in the  hands of sex offenders.

Here are the front and back sides of the eleventh hour mailing employed against conservative State Senator Hartsuch.  Notice the oh-my-god graphic and then the logic  used by Grubbs-Smith. The refutation of this smear is on our page line @ Shameful. 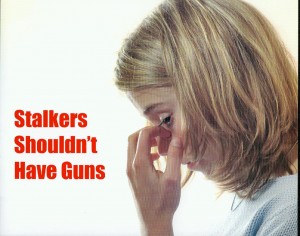 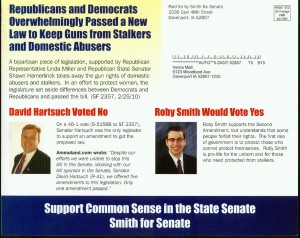 Now look at what Democrat operatives had to say about Governor Branstad  . . . the oh so compelling graphic  . . . and the equally refined logic  . . . delivered earlier in May 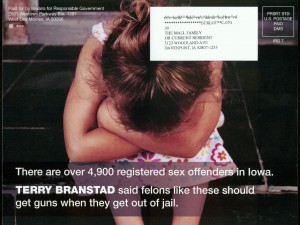 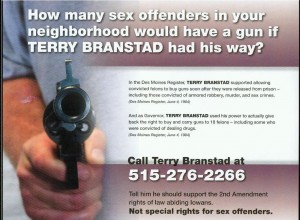 The terms we used to describe this despicable sort of campaigning were not first uttered by us. The terms “misleading smears” and “distortions,” and “Illinois style politics” were first used by Branstad’s 2010 campaign manager Jeff Boeyink regarding the Democrat anti-Branstad campaign. Adding to the “paradoxes” was that Boeyink was formally an executive with Iowan’s for Tax Relief.  Grubbs has been notoriously close to personages there.  That Grubbs-Smith used the same theme is at least ironic.

The occasion of Branstad’s visit  was a bill signing ceremony regarding Senate File 2339, legislation which provides for tax credits for “repurposing” abandoned public buildings. Victory Enterprises is housed in a former school building in extreme southwest Davenport.   We have no idea if or how Grubbs’ Victory Enterprises benefits from the law nor do we have any desire to wade through its specifications. But there is a general irksomeness to such bills.

We object to special considerations for sellers or buyers no matter who they are as they are not available to other businesses on an equivalent basis in their particular pursuits or needs. We also find it curious that a more accessible now “repurposed” building, the old Johnson School west of Five Points in Davenport, which is older and more difficult to repurpose, because of its architectural design and zoning, but which was decommissioned more recently, was not selected.  Left to deteriorate it would have been more of an eyesore.

Even more objectionable is that Branstad’s decision to highlight a firm such as “Victory Enterprises” normalizes political perfidy  and thereby associates himself with it.