The last Republican senate primary debate was Thursday night.  The mode for the competitors will now be to get out the vote. Statewide absentee voting has not been heavy so prepare yourself for some robo calls encouraging you to vote Tuesday.

The Iowa Republican (TIR)  publication has been accused of shilling for Mark Jacobs due to connections between sponsors and its editorialists. We think they have been even handed about the senate race in pointing out shortcomings in all the candidates. Ignoring Schaben for the most part might be considered a favor on that score.  We do not always agree with them, indeed we think they have been too hard on Ron Paul supporters compared to similar excesses from establishment Republicans and their loser records. But they are up front about being a journal of news and opinion.

Frankly we do not think they could be considered honest and not recognize that Sam Clovis has shined in the debates, as they have done, based on grasp of issues and forcefulness of presentation. We think those attributes are primarily what should matter and are why we personally support Clovis  (Veritaspac is not a federal political action committee).

KCCI a Des Moines television station sponsored the last illustrative debate.  At this writing we cannot locate a direct link to their archive of the video of the debate however you might try their homepage for a listing should it become available later. You can see their individual interviews of the candidates by viewing these links.   Clovis   Whitaker    Jacobs   Ernst   Schaben.

One of the pull quotes from the debate that TIR hit on was this one from Joni Ernst regarding the issue of immigration :  Part of Ernst’s response included this line: “We need to find out what those laws are.”   We think she should have been prepared with a more knowledgeable response if she wants to be a force for conservatism and differentiate herself from the Chamber of Commerce, whose endorsement she has touted, and their support of illegal immigration amnesty policies. Implementation by Obama would be a travesty, their  proposed “reforms” defective in themselves.

We have highlighted the Jacobs campaign’s attacks on Ernst over the last few weeks and in doing so pointed out that Jacobs, while the worst choice, the most vulnerable among all of them as a candidate, is no better than Ernst on what we can predict from his record as regards issues that will affect Iowans.  However we have never suggested that either would not be the superior choice to Bruce Braley in the general election.  Braley is that bad, and some sort of Republican majority is necessary for true conservatives to have a chance to lead the legislative campaign to defeat Obama’s disastrous policies.

We are not underestimating the inclination of big government Republicans to undermine conservative efforts, but between such types there are some not as likely to get in the way.  Fortunately that is a choice that does not have to made in Iowa in this primary. But not according to Mark Jacobs.

Mark Jacobs does not think Joni Ernst is even superior to Braley  according to his latest attack piece.

We think Jacobs has jumped the shark with the piece displayed below.  We were are not surprised by something of this nature, given his prime consultant Steve Grubbs/Victory Enterprises track record, but we thought Jacobs might have had more discretion, if he is the CEO he claims to be. 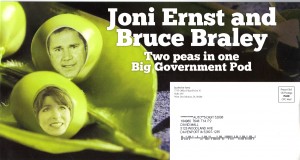 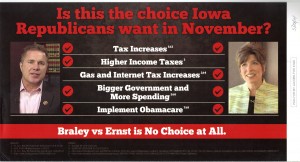 Seriously, no choice between Braley and Ernst even on the listed matters as a matter of degree?   Now that is pathetic unmitigated irresponsible desperation to win a primary.

The problem for Jacob’s is he is no better on those scores and has supported horrendous  tax increases himself in the form of cap and trade.  He has also made boneheaded statements and been unprepared, like Ernst.  Certainly Ernst surrogates have been just as negative about Jacobs.*  The truth is Ernst and Jacobs are the closest to  being two peas in a pod.

Sam Clovis has run a positive campaign, is knowledgeable and forceful on issues, and has demonstrated widespread support.  Sam Clovis is the rightwardmost viable candidate, that is, the real “Buckley Rule” candidate.**    R Mall

*  Ernst’s  has received the endorsement of the organization doing much of the negative ads about Jacobs. Ironically the chief financier of that organization is a hedge fund executive, Mark Jacobs is an executive alum of Goldman Sachs.

** More on this subject over the weekend