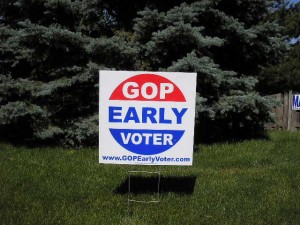 Most political operatives understand that “vote by mail”  is more susceptible to fraud and other assaults on the integrity of the vote.  The perps of such activity are predominately, overwhelmingly Democrats.  It is a playground that they use famously.  Suppose those were not factors, does an emphasis on increasing it necessarily help Republicans?  We think not.

At last week’s Scott County Central Committee meeting, for the third or fourth or tenth election in a row, the message from on high was that committeemen should embark on another absentee (vote by mail) project directed at Republicans of all stripes. Giving them reasons to vote straight Republican was not mentioned.

The recruitment to the effort often plays on the superficial notion that . . .  gee-wiz,  so and so Republican “won” the election, but then the absentee vote came in and they “lost.”  As if to say if only “we” had gotten more people to vote absentee they would have won.

NO.  They lost because not enough people voted for them period. But apparently gold stars are handed out for substituting voting by mail, for voting in person at a satellite location or on election day.

The Scott County Republican goal is to contact every Republican in the county beginning now and offer them materials to vote absentee by mail. Party advocacy literature is not even part of the program, just personal contact. Obtain x number of absentee voter requests and the participants should feel good about  their achievement.

Our view is that wasting volunteer time and resources hectoring people to vote absentee who can just as easily vote in person or by satellite, may mean our candidates are arguably more likely to lose because of that wasted effort.

The usual response to such “apostasy”*  is that many elections are lost by just a few votes, or statewide elections by just one vote per precinct. The “Republican” who didn’t vote, that supposedly would have voted for “the” Republican,  “cost” the precinct, and the election, and it is the fault of not pushing absentee voting by mail.

It is of course depends on the notion that spinning wheels on the mechanism of voting by mail is comparatively productive to general GOTV efforts. And never mind that time and other resources better spent might induce TEN more people per precinct to vote for “the” Republican.

We have also never quite understood the efficiency of any effort at increasing the vote  limited to contact with Republicans when Republicans are in the minority and votes must be had from the much larger no-party registrants. But that is not the focus of this post. Here we question the usefulness of pursuing all nominal Republicans to vote absentee especially prior to a full regime of Republican and anti-Democrat education and inoculation, prior to election day. If we are good they will be more likely to vote straight ticket.  The earlier nominal Republicans vote, the more likely they are to split their vote.

We believe efforts to increase straight ticket voting by nominal Republicans would be more productive of actual votes gained as compared to efforts to increase vote by mail rates of Republicans in general.  For Republicans, particularly in cities with satellite voting, the likelihood is that the effort is more one of exchanging vote by mail for voting in a booth. That is not productive use of volunteer time and other resources.

There is no convincing evidence that we have seen that efforts focused on inducing people to vote by mail is more than a time-consuming effort to exchange one voting method for another. However there may be statistical data which we are setting forth here for your criticism to at least suggest that such efforts are associated with Republicans so induced to vote absentee, splitting their ticket at a higher rate than those who vote straight ticket waiting to vote in the polling booth.

We are not saying there is any demonstrable causation only perhaps an association, although the numbers seem compatible with our instincts about the sociology or psychology of “soft” Republicans and the benefit of giving all people more time to absorb the more compelling Republican messaging, including Democrats, rather than aggravating an aura of the “need” to vote early — an objectionable aura creating a playground for fraud, integrity issues, and truncating debate.

Observe the following voting statistics for Scott County.  The “Statement of Votes Cast- Straight Party” data is only available through 2010.  In 2012 the Scott County Auditor apparently stopped publishing straight party voting broken down by those cast absentee and in the polling booth.  If 2012 data can be gleaned from other reports or from the Secretary of State it was not obvious to us.

Readers may be able to double-click on the graphics and view them in expanded form.

In 2006 Democrat and Republican registration was roughly the same at 28.22% for the Dems and 27.03% for Republicans of the registered voting population. In the general election data shown above for that year we see that, of those voting straight party, either at the polling booth or absentee, 39.84% that year voted the Republican line and 60.16% of those voting straight party voted the Democrat line. Combining factors we see that in 2006 (and previous years by the way) Democrats had a greater propensity to vote straight party.

But there is more to the story.  Looking at the individual categories of voting straight party absentee vs polling booth, we see that Democrats voting absentee in 2006 comprise 68.53% of that group and Republicans 31.47%.  Then when we look at the polling booth straight ticket voting we see that the Democrat percentage has dropped to 56.78% of those voting straight party and the Republican figure has increased to 43.22%. 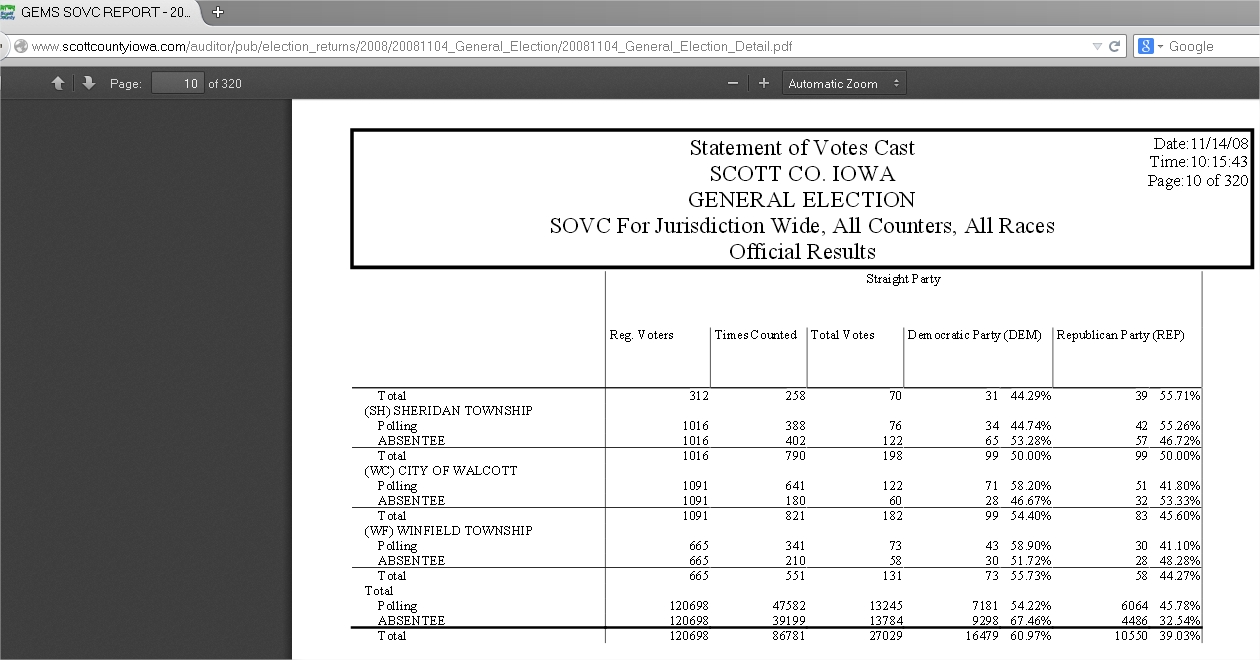 In 2008 in Scott County Democrats obtained a significant registration edge at 32.43% of the registered voting population while  Republican registration was 25.72%.  In the general election data shown above for 2008  we see that of those voting straight party either at the polling booth or absentee, 39.03% that year voted the Republican line and 60.97% of those voting straight party voted the Democrat line.

Those percentages compared to 2006 are roughly the same although the raw numbers voting straight party reflecting a presidential year are up 23.5% for Republicans and 27.7 % for Democrats. The higher percentage for Democrats we take to roughly reflect their 4% gain in overall registration.  Republican registration in raw numbers barely went up at all in 2008 over 2006. Other factors can pertain but we conclude that in 2008 Democrats were again more likely to vote straight party.

And once again there is more to the story.  Looking at the individual categories of voting straight party as an absentee voter vs voting straight party in the polling booth, we see that of the universe of straight ticket voters, Democrats trended lower when  voting absentee in the voting booth compared to absentee and again Republicans were the opposite. Republicans trended to more straight ticket voting at the polling booth compared to voting absentee.  Could that not be explained by the concept that more voting goes on in the booth than absentee, particularly for Republicans?  We suppose.  But Republican absentee voting, straight and non straight, was increasing during this time. And consider the data below regarding 2010. 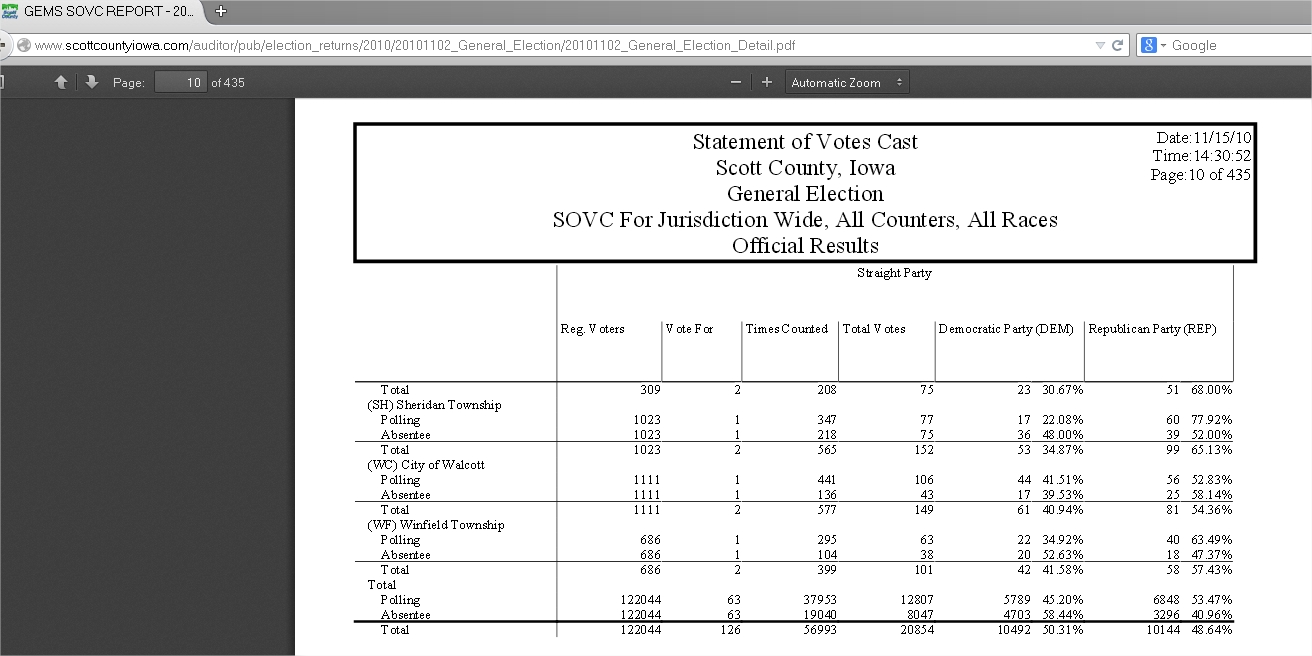 In 2010 registration figures for the two parties in Scott County closed a little bit with Democrats becoming 32.1% of the registered voters  and Republicans 26.42%. The universe of people who voted straight ticket in the 2010 general closed as regards the percentage split with Republicans comprising 48.64% and Democrats 50.31%.  That is a good thing for Republicans as regards straight ticket voting in general. Republicans trended up while Democrats trended down in raw numbers voting as such in the three elections looked at herein.  But absentee voting rates were also closing.

If nothing else the data is consistent with our instincts about the demographics the sociology, the psychology of Democrats, they become more discerning and open to Republicans the closer to the election. That is another reason why Democrats have pushed absentee voting, better turnout from their political culture but more specifically a higher percentage of straight ticket voting.  They can get more bang for the buck than Republicans can get from it and will use every unscrupulous means to do so.  Republican efforts should be focused on tightening up absentee voting, not encouraging it, and on giving the general populace and targeted groups reasons not to vote for Democrats whatever the means.

Republican politicians push these absentee programs because they probably are not all that confident in their message. Consultants push them because it either makes them look intense or because there is a money trail involved.  Local leadership crank it up to appear like they are doing something useful or to give the troops something to do, wasting much of their time and that of the volunteers.

The idea that absentee voting is like “putting votes in the bank” as if costs are saved once they have voted is ludicrous in relation to real world politicking.  No one is removed from any list, the absentee voters still get as many calls and letters and lit drops.  Some will vote later rather than earlier.The campaigning continues to households because not every member of the household will be known to have voted already.  The cost to remove them   on a timely basis is more than the cost to keep up the useless contact, by volunteers or otherwise.  Obviously broadcast campaigning are not curtailed.

A response might arise – what about encouraging hard Republicans (those who vote in primaries)? It is still wasteful in terms of any focus in a mailing or even as an inclusion of forms or taking any significant amount of space in other communications.  By definition those are the people who will automatically vote and know how to vote.  Passive notice of the availability of vote by mail information is the most information required.

The only Republican group where some deference to vote by mail is appropriate is the traditional focus on the home-bound aged. Others, including the deployed military and other actual absent residents require no more hectoring than the inclusion of nominal mention of the availability of vote by mail requests in regular periodic communications.

We would suggest to all interested in electing Republicans to step up activities and communications in the summer . . .  ads, lit drops and other inoculation efforts especially to no party voters and soft Republicans.

Well constructed phone canvasses on issues in order to develop lists for targeted follow-up contact (and close the deal) are useful. This may allow Republicans to peal of soft Democrats. Again, education and inoculation and expose’s must be started in the summer months.

If people are hell-bent on offering absentee voting, a well constructed robo call with response capability would be at least as thorough as what is proposed locally.  We base this on our theory that the number of phones being answered or receiving a recorded message is possibly as good as the percentage of answered door knocks or noticed literature on a door step.

A robo script and methodology might be something to the effect: Do you plan to vote Republican . . . push 1 for yes / 2 for no.   If no the call truncates with a positive message about Republicans. If yes, the recording proceeds to: Would you like an absentee voting request form sent to you? Yes 1 / no 2.   Include a motivational thematic close.  Use the troops for things actually focused on increasing the vote, rather than how someone votes.    R Mall

0
This entry was posted in UNCATEGORIZED, VOTING INTEGRITY. Bookmark the permalink.