Judges On The Ballot

The judicial selection process in Iowa is referred to as a “process of gubernatorial appointment through nominating commission.” Judges are first appointed by the governor from (usually three) nominees recommended by judicial commissions set up for each judicial district.  Members of those commissions are determined in a quasi-political process which includes the state bar association and gubernatorial appointment.  A more complete explanation of the differences in make-up and processes for the Iowa Supreme Court and the Iowa District Court commissions is available here.

After being appointed and fulfilling their first term of office judges have to survive a vote by the people of their jurisdiction as to whether they should serve each new term for the same judgeship, i.e. the retention vote. Terms are staggered so that not all judges will be up for retention in a given jurisdiction each election.

The following sitting judges are up for a retention vote on the November general election ballot in Scott County.  The first two listed below sit on the Iowa Court of Appeals, which is the next highest court to the Iowa Supreme Court.  Their names will appear on all ballots throughout the state.  No Iowa Supreme Court justices are up for retention this election. District and Associate Justices are from the 7th Judicial District which  encompasses Scott, Cedar, Clinton, Jackson and Muscatine counties.  (double-click on tables to expand) 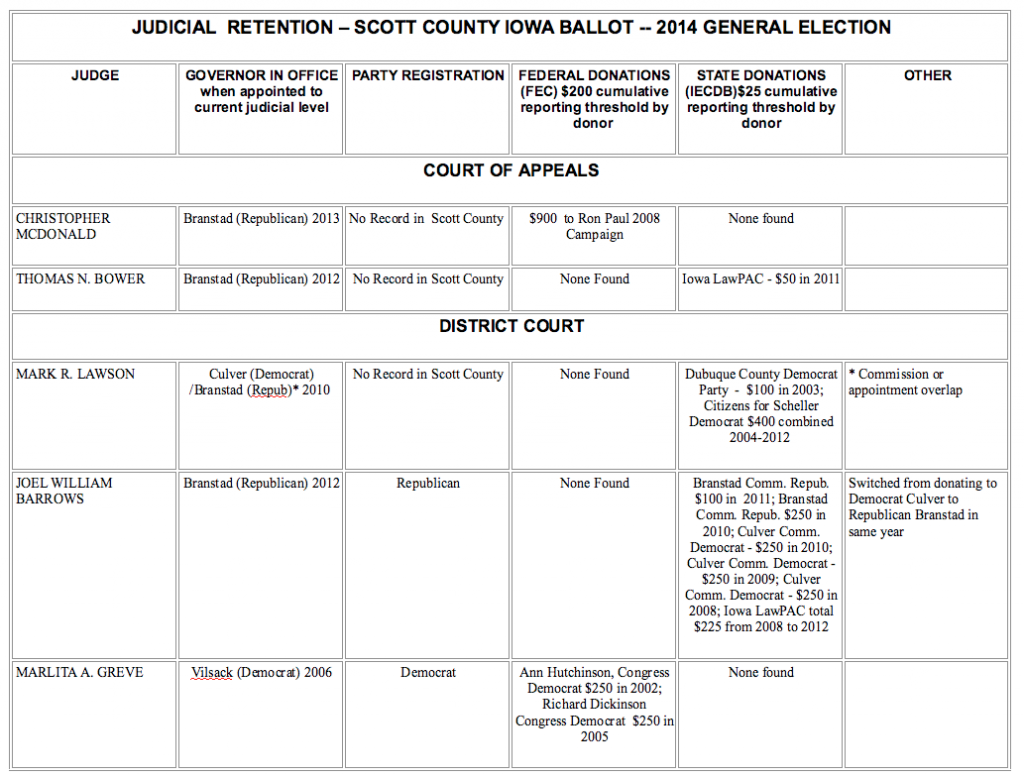 The information we have supplied adjacent to each name on the Scott County ballot is the result of a survey of available data bases that may have some bearing on your decision whether to vote to retain. In reviewing the process and with some feel for the politics of bar associations it is not too difficult to see that the initial judicial selection process is very susceptible to partisan politics and the dynamics and prejudices of the state bar association. Recognizing it is not certain, nevertheless we believe there is a rough association of judicial philosophy aligned with political philosophy and associations.

We reviewed judgepedia.org for basic background information for each judge including the year appointed.  In most cases, other than partial terms of less than a year, the governor in office at the time makes the final decision from the nominees presented to him by the nominating commissions.  We believe the politics and philosophy of that governor is of significance in evaluating the jurists. Other dynamics may pertain but how well wired the individual judge was with the nominating components, and their makeup at the time can be considered, and appropriate political philosophical judgments made.

Next we looked for any history of political giving by that judge at the state and federal level. Accordingly we looked at the data bases provided by both the Federal Election Commission and the Iowa Ethics and Campaign Disclosure Board. Then we cross referenced the results of our search of those official data bases with that maintained by Follow the Money.org.  There were discrepancies but they were not inconsistent as to any pattern or whether there was any record of political giving.

At this writing we have not investigated any reportable retention election campaign committees operating either for or against retention of one or more of the judges.  Historically they are rare but we will investigate further.

We did a cursory Web search of the judge’s name for any standout news or references to their work. That did not turn up much that we could make use of so  we would appreciate additional input about the various judges, notable cases, their competence, fairness, philosophy and temperament from knowledgeable sources. It could be argued that we should provide information on the spousal or other household or familial political connections. There are no doubt exceptions but we suspect the patterns would largely be the same.

While much more could be said about each judge we do not consider what we have provided is prejudiced information as the quasi-political process is what it is and the judges themselves play to it. We believe politics (philosophy) should be part of the process.  We also believe in term limits but as long as there are not  formal term limits (which is not the same as age limits) for the judiciary, the people retain the right to initiate changes so as to improve the judiciary pool and strengthen the rule of law along philosophical lines.

We believe we matched available political records accurately but readers are encouraged to check links and other sources.  We will promptly post any corrections or useful information we are made aware of.  Readers can contact the judges and ask them questions. No defensible judicial canon says they cannot answer questions about their judicial philosophy or their political leanings.  Given that party platforms speak to governance, constitutional issues, crime and punishment their political associations are of significance.

This is not a great amount of information but it is useful and hopefully will spur more information and serve as a template for future reporting. Contact information for the judges is available in the brief bios contained in the judgepedia site.

2 Responses to Judges On The Ballot