What Difference Will it Make ! ! ?

With apologies to Hillary Clinton for the apoplectic appearance  of our headline . . .  such is her territory. 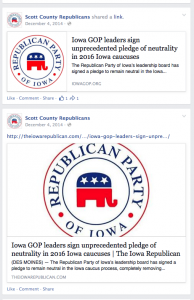 Earlier this month we noticed that early last month there was an “official”  Scott County Republican (SCR) Facebook entry which exclaimed that “Iowa GOP leaders sign unprecedented pledge of neutrality in 2016 caucuses.”  The screen capture we provide shows it in all its breathless glory.  The entry was a copy and paste from the Republican Party of Iowa which re-posted an article by that name from The Iowa Republican (TIR).  You can read the article here.

We can’t be sure what the SCR Facebook entry person was trying to portray by giving the story such significance, particularly given SCR’s shafting of Ron Paul delegates in 2012. That shafting is chronicled in these pages under the category Scott County Republican Matters.

We are all for actual evenhandedness towards prospective nominees and rules to insure the candidates of it, but a grandiose pledge insures nothing. Simply having the discretion of appearances and not publicly supporting a candidate is fine, but that in itself insures nothing. While not preferred, we would rather have leadership open about their preferences and constrained by rules that make that preference no more operative than their prestige, such as it is.

We have been consistent in calling for uniform rules that would require proportional representation of delegates to district conventions. Such a  uniform standard would have gone a long way to prevent the actual (or even the accusation) of excesses by the Ron Paul supporters at the district and state levels. As far as we know, they operated within the rules, or rather the lack of rules.  There were no rules to constrain them and regrettably they showed little constraint.

But we know in Scott County, between caucus night and the county convention, that Ron Paul supporters got the message of how the game would be played by the establishment Republicans. First the State Chair (an announced Romney supporter) jumped the gun to wrongly declare the victor of the caucuses to be Romney. Then in Iowa’s third largest county,  Ron Paul supporters were victimized first when they received no representation on the delegate nominating committee (and stonewalling and opaqueness to boot) and then elective bias resulting in them receiving less than half of the delegates to the district convention than true “neutrality” would have provided.

We had less concern that a member and adviser to the nominating committee was a prominent Romney supporter and organizer  than the manipulative work output of the committee.  That the Chairperson of SCR appointed such an unbalanced committee and allowed or refused to use any influence to correct their work was bias of an egregious order. Word spread quickly to Ron Paul organizers and supporters statewide.

The then Chairman of the Republican Party of Iowa resigned for his actions, appropriately, to try to repair the integrity of the caucuses. The SCR Chair, who as far as we know had not announced a personal favorite candidate, did not resign.  Whether caught in a guileful act or not, when the results of their actions became evident, one showed concern for the integrity of the caucuses, the other displayed no such concern.

One Republican “leader”, who had been open about his personal support of a candidate purposely or innocently, imparted favoritism.  Another “leader” through failure or animus  toward a group, failed to insure neutrality.  One was open about who they supported, the other did not go public, but to the victims what difference did it make?

Proportional rules are a must.