Is this the week the Republican Party died ?

Melodramatic?   If there is a more positive interpretation of today’s notice by Speaker Boehner that the House under his leadership will not pursue legislation to defund Obama’s unconstitutional  executive order amnesty we will welcome it and communicate it.  Consider his capitulation statement this morning to the Republican Caucus as reported by National Review’s Joel Gehrke:

“I am as outraged and frustrated as you at the lawless and unconstitutional actions of this president,” Boehner told House Republicans during a conference meeting Tuesday morning, according to a source in the room. “I believe this decision – considering where we are – is the right one for this team, and the right one for this country. The good news is that the president’s executive action has been stopped, for now. This matter will continue to be litigated in the courts, where we have our best chance of winning this fight.”

Focus on Boehner’s statement that we set in bold above. “Lawless and unconstitutional.” The full truth would be for him to have continued:  “but we are going to fund it and all that cascades from it anyway.”

National Reviews editors responded to Boehner’s “the good news” with this comment:

as if Congress itself doesn’t have a duty to police the constitutional order. (A lawsuit from objecting states has resulted in a stay of the executive amnesty, but, alas, it seems unlikely to stand.)

Boehner, as reported by Gehrke, went on to say:

“As you’ve heard me say a number of times, the House has done its job by passing legislation to fund DHS and block the president’s executive actions on immigration,” he reminded the conference. “Unfortunately, the fight was never won in the other chamber. Democrats stayed united and blocked our bill, and our Republican colleagues in the Senate never found a way to win this fight. The three-week CR we offered would have kept this fight going and allowed us to continue to put pressure on Senate Democrats to do the right thing. Unfortunately, that plan was rejected.”

Here the Speaker tries to shift blame to conservatives for not agreeing to a three week extension and to the Senate as if he had done all he could all along.  The resistance to further delays is understandable. Republican leadership has had three months to figure our what they should do, to anticipate that “surprise” Democrats would filibuster. Nevertheless did Boehner  run another week extension past them or propose the reconciliation avenue?   Yet it has been weeks of high drama with Republicans looking befuddled as to what to do next.

Speaker Boehner’s chief lieutenant Majority Leader McCarthy called for the Senate to eliminate the provision of the filibuster.  He would not have done so without Boehner’s approval. Over in the august debating chamber we see that:

Senate Democrats filibustered the creation of a conference committee on Monday evening, thwarting the process by which the House and Senate might have ironed out the differences between the DHS appropriations bills passed by the two chambers.

That little maneuver by Democrats should have sent McConnell to the mats to undo the filibuster. Instead, “regular order” for McConnell is protecting a filibuster that is now no more involved than shouting Kings X in a children’s game. They do not really hold the floor and talk or debate.  It is little or no burden on recalcitrants. 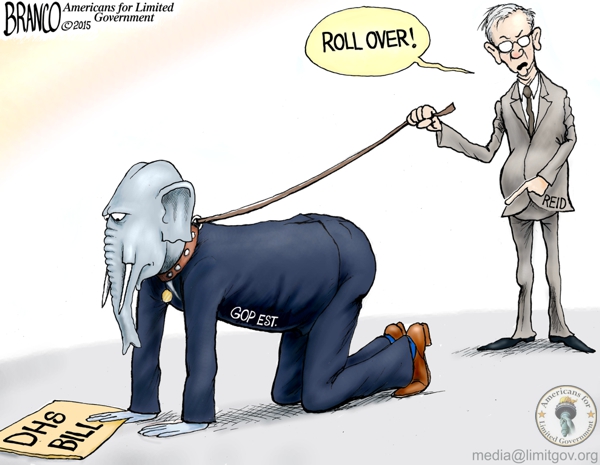 The GOP Leadership also answers to the Chamber of Commerce. Branco cartoon used with permission, courtesy Americans for Limited Government

If McConnell had any intention of pulling out the stops (ending the filibuster) we presume he would have signaled it. Instead, McConnell as leader of the Senate tries to pretend that “regular order”  is more important than protecting the Constitution while he lets Democrats maneuver and get away with atrocities on the Constitution.

That was the national seen today sufficient to disgust the Republican base after all of McConnell’s talk of “fighting tooth and nail”  The period of insults to the Republican base started here in Iowa with the bums rush raising of Iowa’s gas tax last week. It was ramrodded by Republican Speaker Paulsen  just a few weeks after an opening day speech saying (with a straight face) that Iowa has a spending problem, not a revenue problem. With jaw dropping audacity he proceeded to organize a putsch to raise gas taxes 45% , a billion dollar increase over five years. That was recounted in these pages and elsewhere.

Obama has practically assumed dictatorial powers because there is nothing to stop him, certainly not the hide bound Republican leadership (at best). Maybe the discretion of six or more Democrat Senators who might side with Republicans, but don’t take that to the bank, especially if Obama’s actions feather the Democrat political nest.  So is any more reason needed to think the Republican Party died, and maybe the republic with it?

1 Response to Is this the week the Republican Party died ?