Under the local Republican circus tent 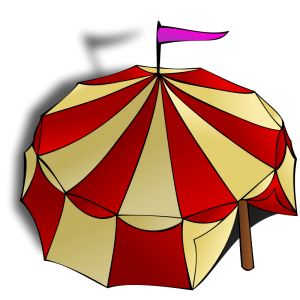 We would be remiss, given it is our backyard, not to comment on the Scott County Republican Central Committee (SCRCC) election meeting held this week.  Visiting the Scott County Republican Website this morning (it is not something one has to visit often in order to get caught up) we were rewarded with some officially presented “social media” of Tuesday evening’s events.

It helped trigger our comments below which we would  otherwise have minimized.

Now we don’t do social media, ” Facebook” or  “Twitter,” so we will stand corrected if we have not navigated them properly from the links available on the SCRCC  Website. We may have missed some profundities, and if so we apologize. Relying only on the social media links observable by us, see the screen captures below, one who was not at the meeting might think there was some grand drama as evidenced in the breathless Tweets emanating from the event (read screen capture from the bottom up).

Apparently the larger print indicates real suspense. Anyway the tweet person didn’t  happen to indicate that there was no opposition.  However a tweet moments later did thank the nominating committee for its tireless efforts.

No opposition can indicate anything from grand acceptance to no one gives a shit who counts the toilet paper rolls and ensures the Republican Party of Iowa (RPI) people are not using too much.   That is pretty much the effectiveness of the executive committee as practiced and found acceptable.  Oh  . . . and finding a new place to house the TP dispensory, which will be needed.

Some more Tweets from the “event.” 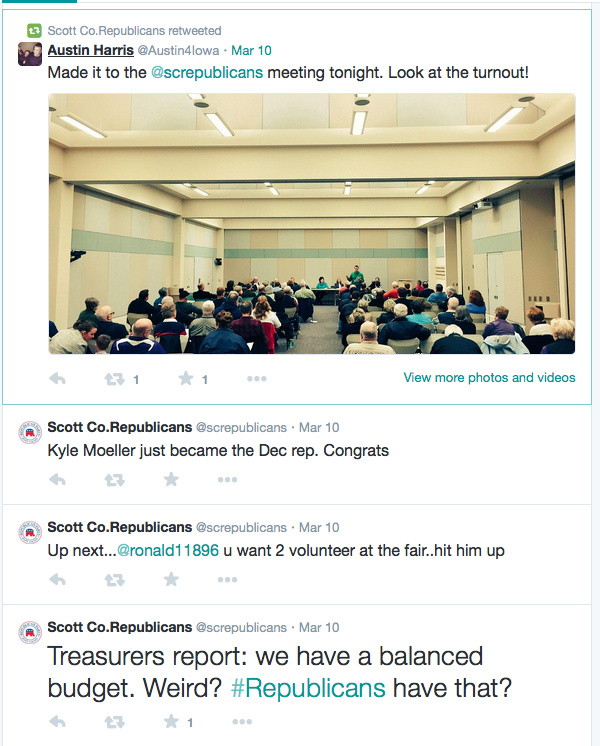 The picture “tweeted” above is a “retweet” from someone easily impressed.  Scott County is the state’s third largest county. We estimate 70 to (generously) 80 voting members present. That would be 55% to 63% of the Central Committee’s full complement. That was the attendance after the Chairperson admitted to “calling many” and “begging” them to come. Those are quotes. It appeared to be the same old folks in attendance of which we might guess a total of five or six were under forty (no offense to anyone, as we busted that a long time ago).

But come to think of it, this real-time Tweet thing has potential.  It provides as close to minutes of the meeting a Central Committee member will ever get spontaneously in written form. Distributing minutes prior to a meeting electronically, or having them in written form at the meeting is just not something that the unchallenged administration does. They use Twitter, (on occasion) they “Facebook”  (on occasion) they Instagram (on occasion) so we presume they are vaguely aware of technology  . . . but that whole e-mail / mail box thing still escapes them.

Facilitating communication between committee members and from precinct constituents in an easily accessed avenue of private e-mail boxes has been promised since May of 2013.  We expect the always transparent leadership is still waiting for the keys to it from the Congressman Bustos supporter they put in charge.

CC members were better informed in the days of mimeograph machines and snail mail.

Note the tweet about the Treasurer’s report. The large print was in the original.  On this we are out on a limb because we came  in late, but if true to previous meetings, the shoe would fit. We doubt there was a budget on display.  A CPA delivers a check book balance and a comment, and that is supposed to pass for due diligence to the governing body?   Oh well, maybe all that did happen in the lengthy time span of the meeting, maybe an hour start to finish, including the election.

Did you know John Kerry served in Vietnam?

The perpetually running for something Chairperson did provide attendees with an updated resume, placed on seats.  Nobody else running bothered.

Missing from the resume was any mention that, after an unprecedented amount of hectoring Republicans to vote early, Republican turn-out percentage in Scott County did not improve in 2014, indeed it declined slightly over the last non-presidential period.  That, in spite of a high-profile Senate race.

Candidate recruitment was not a line item on the resume either. In the last election half of the city of Davenport did not have Republican state legislative candidates on the ballot.

Guest editorials, earned media, talk show calls, even letters to the editor,  as is done by the Rock Island County Chairs — not listed.  Essays even in the venue under her complete control, the Scott County Republican website — zip. Outreach to the community . . .  taking on Democrat policies . . .  appearances defending Republican agenda to the general public in public meetings  or community organizations, where is the outreach beyond rare and uninspired literature table or walking behind an elephant?

However we did get a scholastic resume in part, (Scott Walker call Marquette) and for the chairperson’s children.

The resume implicates a lot of driving to maintain all the committee positions listed  – but driving through say south-central and south-west  Davenport (other than River Drive) Buffalo, Blue Grass with some focused outreach and recruiting stops — not listed. No stops for even the choir.

Subjects not prudently able to be listed on the resume . . .

Since we were visiting the SCRCC Web site we checked on the other links and pages. Anyone in tune to events and issues does not have a problem finding content in service to the Republican agenda.  Well, except leadership with little interest in promoting an agenda as opposed to themselves. Actually they are not incompatible and help with organizational growth and loyalty. But never mind.

Tweets –  tweets are hard when there is no meed to tweet about yourself —  there was one tweet the entire month of February and one in December.

Instagram – from the looks of things it will be kept as current as Flickr was (it is now occupying its spot).

News page you ask?   Opening it we found it to be a  wholly owned avenue for Joni Ernst news releases.  Literally no one nor anything else appears. On 3/06 there were 20 posts all the same day, all Senator Ernst.  Fine, if all the other Republicans were dead.  But then there was a lot of Joni news catching up to do since there was a gap of five weeks without any political news at all (as represented on the site) . And there were other gaps over a couple of months interrupted only with more Joni news going back to November.

Full disclosure – one of the things that set us off about the Tweets,  the Facebook entries , the “News” page — was not seeing anywhere a set acknowledgment commemorating the passing of Gina Lantsky who died January 31. We did see an acknowledgment of someone else’s passing so we wondered .

1 Response to Under the local Republican circus tent