Senate votes to castrate itself — Corker bill approved 98 to 1

Here is an explanation of the bill from a liberal source — Jonathan S. Tobin writing at Commentary Magazine: Like Obama’s Iran Deal, Corker Bill May Be Worse Than Nothing  (bold our emphasis)

The bill is now being praised as a rare example of bipartisanship. But though Corker’s intentions may have been good, the result is not. No matter how bad the Iran deal is, it’s obvious that the president will be able to pressure enough Democrats to back him to sustain a veto. If his bill doesn’t provide real accountability and actually gives the president a path to passage of a deal with only 34 Democratic votes, then all their effort will have been for nothing. Indeed, it will be worse than nothing since Obama will be able to say that he has given Congress a say even if he has vetoed their rejection of the deal. That’s why rather than being another suicide charge in the manner of the 2013 government shutdown, efforts to amend the Corker bill are actually the right thing to do.

Only a handful of conservatives tried, among them Chuck Grassley and Ted Cruz, but in the end even they voted for final passage.  Tom Cotton, the only Senator voting no and, we think not coincidentally, is the only Senator with a Combat Infantry Badge for service in the war on terror ( he served one tour each in Iraq and Afghanistan).

In particular, Senator Ron Johnson’s amendment that would force the Senate to treat the Iran deal as a treaty that would require the normal two-thirds majority for passage deserves the support of the chamber. So, too, do measures proposed to require the administration to certify that Iran is no longer supporting terrorism (a point that was strengthened this past weekend as Israel attempted to interdict arms shipments from Iran to Hezbollah).

Democrats may not be willing to support strengthening the bill, but contrary to the assertions of its supporters, the “clean” bill as it currently stands may be worse than nothing at all. Efforts to compel senators take a stand on treaty status and terrorism may be the last chance to put them on record as being willing to support a measure that would actually prevent the president from sacrificing U.S. security and the stability of the Middle East on the altar of his vain pursuit of détente with Iran. These amendments may be poison pills, but the real poison is a bill that will give a seal of approval on a tragic foreign policy blunder.

And we witnessed all but one Republican vote to give each other political cover. 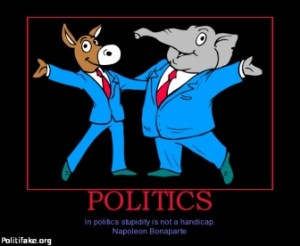 Corker commented after the vote:

“It’s the first time in the 8 years and 4 or 5 months that I’ve served in the Senate that I can remember Congress asserting itself and taking power back” from the executive branch,

“The bill…will provide some political cover to Senate Democrats…yet, it is a virtual certainty that no matter how terrible the deal is, it will go into effect…”,  (because many of the same Democrat senators who voted for this will almost certainly vote to sustain Obama’s veto of any congressional action on the deal he doesn’t like.)

If there is any question about any aspect of this latest fiasco to which the answer is not obvious, it would be: “Is Senator Corker this stupid, or does he think the American people are?”

Iran agreement of only “minor importance”? Then, I guess WWII was a “skirmish”!

I don’t know how many “angels may dance on the head of a pin”. I also don’t pretend to know or understand all those “fine points” of the US Constitution over which high-priced lawyers may argue and debate, debate and argue, blah, blah, and at the end assure the “little people”…that’s you and I, ordinary Americans, who somehow thought we understood the basic elements of our nation’s Constitution and the concept of a “government by the people for the people” , that they’ll handle it.

Ah, yes. So you thought that there was legitimacy to the concept of “separation of powers’ and “co-equal” branches of US government (at least, it seemed to have some force when there was a Republican president, a Democratic controlled Congress and a liberal Supreme Court.)

And where the US Constitution says that treaties with foreign governments by the executive branch requires the approval of a two-thirds majority of the US Senate you thought that was an established pillar of our government.

Not so fast! That might seem like a novel idea, but to courts and Constitutional “experts”, it’s little more than that…just an idea.   From Heritage.org:

“Some scholars believe … that not all international agreements are treaties, and that these other agreements would not need to go through the procedures of the Treaty Clause. Instead, the President, in the exercise of his executive power, could conclude such agreements on his own. Still, this exception for lesser agreements would have to be limited to “agreements” of minor importance, or else it would provide too great an avenue for evasion of the protections the Framers placed in the Treaty Clause.”

So, it seems, there you have it. The conditions are thus set for an act by President Obama which should be considered blatantly unconstitutional and even dangerously illogical but will be executed and will bring the entire world as close to apocalyptic destruction as ever in history. these guys are crazier indeed more suicidal, than the Russians or Chinese ever thought of being.

One man with motives so dark one can only dare to speculate upon, can decide what he wants to call his actions in order to justify them…to decide by his “lonesome”, what is a “minor agreement “. And, abetting this outrageous action is a cowardly and compliant Congress , willing to stand by and do nothing : a media captivated by its liberal theology which cheers him on ; and a Supreme Court which sees no responsibility to intervene in one of the most obvious challenges to the US Constitution and to the national order ever attempted.

And we “little people” can only look on, aghast that “The Great Experiment”, the system of government which produced the freest, most prosperous, greatest hope for mankind, the United States of America, is coming to an end.

Matter moves to the House

We pray that enough members of the House, which as a body regularly exchanges brickbats with the Senate anyway about “doing their job,”  will refuse to pass the Corker bill or add an Amendment that would force the Senate to treat the Iran deal as a treaty . The House is in a position to save the Senate and the Constitution.  Write, call or e-mail your Congressman and give them such a message.  Contact information is available from our Legislator Links on our page bar above.