Others glad to see the Pope is on the same page about the USA.

The N Y Times, in anticipation of his trip to the US this month, has provided perhaps the most candid portrait of Pope Francis we have yet seen by the liberal press, focusing on his impression of and attitude toward the United States, its economic system, its government policies, and his assessment of the people of the United States.

Pope Francis’ Visit to U.S. Is His First Ever, for Several Reasons

Written by Laurie Goodstein, the piece paints a picture of a Pontiff, humble and concerned for the poor, but deeply resentful of the US. 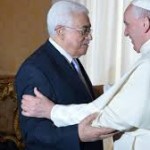 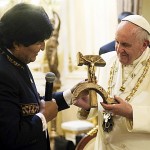 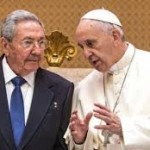 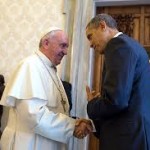 Noting that it is Francis’s first trip to this country, it is suggested that he prefers “to hang out with the poor rather than the rich and powerful.”

While he is “a little nervous about coming”,the reasons for his “absence” , according to those who know him has everything to do with “his distinctive identity.”

Ms. Goldstein writes that the Pope is a “Latin American critical of US economic and political hegemony who looks more to Europe than to North America.”

And while Francis is said to be admiring of the US’s democracy and the “well-being” of its people, he is critical that “everything is geared toward consumerism”, and he “is troubled” by what the Argentines of his generation call “savage capitalism”.

“They” see the US as the “neighbor that tries to close its borders to migrants fleeing hunger and violence.”

On his way to the US, the Pope will spend four days in Cuba where Goldstein writes he will “again prioritize the periphery over the center on a socialist island”.

The article suggests that Francis has been doing some “homework” in preparation for his visit. But it seems to us that His Holiness pretty much has his mind made up about America and Americans. If he is getting any help with his homework, it is likely from the left and radical left, people with whom Francis seems most comfortable. He is a man, who at 78, appears to not be willing to entertain views of those whose might conflict with his long held notions. We saw that in his preparations for his encyclical on climate change. Scientists and experts who had credible opposing views were excluded from providing any input, thank you.

So we look forward to Pope Francis’s visit, but not with any great anticipation. We expect the Pontiff to continue his agenda. He is likely to lecture Congress on the US’s many shortcomings, endorse President Obama’s agenda on everything from “climate change” to income inequality, to redistribution of wealth, to open borders to global governance. At the same time we expect he will quietly utter a few obligatory comments regarding the persecution of Christians by Islamists, the “sanctity of life” and gay marriage, but heavy on the forgiveness, mercy, and non-judgementalism which makes him very popular with the liberal media.

I think finally we can expect him to hail as an extraordinary achievement, President Obama’s Iran agreement and may even present him with one of the Pope’s “Angel of Peace” medals in grateful recognition.

(Hopefully, the Pontiff’s “homework” has made him aware that he is not eligible to be a running mate to the eventual Democratic presidential nominee.)

0
This entry was posted in RELIGION AND GOVERNMENT, UNCATEGORIZED. Bookmark the permalink.