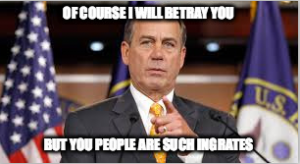 From pledges to stop Obamacare, to rein in the budget, to insure transparency in government all already broken at various times — Boehner now maneuvers a hat trick in latest budget bill:

The measure is expected to require Democrat votes to get across the finish line, and opened up fresh wounds in the House Republican Conference that has been reeling since Boehner’s announced retirement on Sept. 25.     . . .

Overall, it is a strategy that denies conservatives a single policy victory — on anything — and saddles incoming Speaker Paul Ryan with a legacy that will make holding Republican majorities in the House and Senate in 2016 that much more difficult.

The truth is, Ryan could have tried to stop much of this nonsense if he really wanted with a single trip to the microphone, by demanding a halt to any other major legislation prior to taking the gavel. Instead, he made demands to run without opposition and to make it harder to depose an unaccountable, runaway House Speaker.

Now, how Ryan responds to this latest budget deal may come to define his Speakership — before he even assumes the post. Pretending he has nothing to do with it when he is not leading any charge to stop it strains credibility.

The fact is this debt ceiling pact will hamper Ryan’s ability to limit the size and scope of government over the last 14 months of the Obama administration. It even led one member to accuse Boehner of being in league with the Democrats. So, what is Ryan going to do about it?

Robert Romano is the senior editor of Americans for Limited Government.

Analysis of the Bipartisan Budget Act of 2015  (excerpts) Via Heritage Foundation  (bold our emphasis):

The federal budget is on a dangerous trajectory and immediate corrective action is required. The U.S. national debt is at $18.1 trillion. According to the Congressional Budget Office (CBO), if the government remains on its currently planned course, it will spend $7 trillion more over the next 10 years than it will receive in taxes, piling on even more debt. . . .

Rather than taking meaningful steps to address the growing debt, the Bipartisan Budget Act (BBA) of 2015 is a colossal step in the opposite direction. This deal does nothing to reduce the size or scope of government over any period of time.

The BBA would suspend the debt limit until March 16, 2017, allowing for unlimited borrowing by the Treasury for the next 17 months.

The BBA would increase spending on Overseas Contingency Operations (OCO) funding by $15.536 billion above the President’s FY 2016 request. However, only $7.848 billion (50 percent) would go to defense, with the rest going to non-defense programs. The OCO designation, once used to provide resources to the military in times of war, has been converted by the bill into a general slush fund. . . . .

Sections 901 and 902 suspend the debt ceiling until March 2017. The BBA would not only increase the $18.1 trillion debt ceiling; but it would do so by waiving the debt limit for nearly one-and-a-half years. When Congress chooses to suspend the debt limit through a certain date, instead of limiting debt accumulation by a certain amount, lawmakers are effectively abdicating their constitutional power[22] to control the borrowing of the federal government. Congress is practically handing the executive a blank check[23] to borrow as much as needed to finance all authorized government spending during the period of the suspension.

In choosing against limiting debt accumulation by a specific amount, Congress is trying to avoid facing its constituents for having increased the debt limit without cutting spending by equal or greater amounts[24] to begin putting the budget on a path to balance. This debt limit waiver through March 15, 2017, will increase the debt limit by about $1.5 trillion, to a new level of $19.6 trillion.

This wholesale capitulation to fiscal recklessness is all the more damning, following the GOP Congress’s self-congratulations on passing the first balanced budget plan since 2001. Promises to balance the budget are cheap when Congress has no intention to follow through.  . . .

Call your congressman today (e-mail if you must) ASAP today at (202) 224-3121 or via links on our page bar. Tell him to oppose the Bipartisan Budget Act of 2015. It is a complete sell out of Republican values while giving Barack Obama everything.

Paul Ryan will support budget deal    (is anyone surprised)

Ryan said he’d support this package, in part, because it includes “meaningful reforms to strengthen our safety net programs, including significant changes to bolster Social Security. It would allow us to return to regular order in our budget process. And it would mean our men and women in uniform have the resources they need to carry out their mission.”

The reforms are taken into account as regards the bottom line $1.5 trillion debt increase. No safety net is strengthened ,  nor is Social Security bolstered when debt is piled on debt. Regular order is a joke, something only used to subvert needed change. The alleged bargain is pathetic.  Given his presumed advance to Speaker of the House in days, Ryan has the political influence to stop this. If he does not then Ryan is just as guilty as Boehner for this atrocity.