Ryan promises vote next month to roll back ObamaCare  (The Hill)

It is a meaningless promise– easily fulfilled and the completion of little or no effect.  More  damning, it is a charade, more acting, more theater designed to sell more tickets later.  Which is what Ryan apparently thinks politics is about —  charades, theater, in pursuit of the end game – position, prestige and what he thinks is good regardless of what he said in the movie trailer to get small time ticket buyers to fill up the seats.

Unfortunately for us, Ryan has advanced as a result of his craft. He is now Speaker of the House. He would have been less an individual factor in continuing the inculcation of Obamacare were he to have been elected Vice-President under Mitt Romney.

Ryan used theatrics — artful nuance for some, vague promises for others *– along with the “beg me if you want me” ruse, to get to be Speaker. The guild that elected him, was either in on the fakery, or out of regrettable desperation, agreed to his demands. Now together we experience the lacking authenticity. 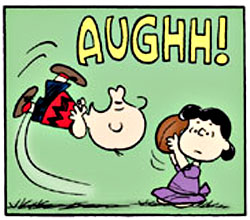 Ryan is now in a position to make meaningless promises and to have show votes like the promised Obamacare vote.  Everyone with a modicum of political insight sees that it is a cheap tawdry ruse, anticipated to fail because it is by design not part of any legislative measure with any leverage attached. He gave all real leverage up by not using the power of the purse in the recently passed Omnibus bill.  He made it worse still by allowing Democrats the brier patch ruse to get everything they wanted in the same bill and the ability to claim compromise. 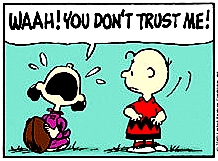 Ryan has also learned to mix up insincere promises with this tactic of meaningless promises. The former requires excuse making and upon the attention span of the electorate, or the next crisis to concern the public, either of which could be counted on to rescue his ilk from accountability in favor of the next promise.  Maybe we should call Ryan “Lucy.”

The Republican Party’s problem is that voters are tired of this failure theater and are more aware of the tricks and are tired of them.  Thus the rise of Ted Cruz who has the scars to prove his authenticity.

*How Ryan conquered the Freedom Caucus

Those were the days:

Paul Ryan: ‘We Do Plan’ on Defunding ObamaCare

Ryan Promises To Exercise The Power Of The Purse

What he hath wrought:

Paul Ryan handcuffs the next president to Obama’s budget