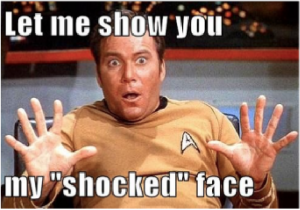 Only 30% think the process is working properly

No kidding! Now why would “the folks” think that?

Briefly, Trump is less “well-liked” than Judas Iscariot (he’s not running by the way); lots of personal attacks by Trump and other GOP candidates, violence between Trump supporters and protestors, Trump is getting most of the attention (not a good thing apparently) . . . you know, that kind of stuff.

Gallup notes that as recently as January, Republicans were much more positive about the election process. Now it seems they’re all “dour” because Trump’s nomination is increasingly appearing to be “inevitable”.

And finally, while the views of the Democrat voters haven’t changed since January, they are just as cynical as Republicans. Of course, Gallup suggests that may be due, not to anything going on in their own party, but to all that turmoil over in the GOP campaign.

Well, I’ll be darned! Who’da thought. It’s that Trump thing even ruining the confidence in the election process of Democrats.

If we might be so bold, it’s at this point we would like to offer our always humble opinion:

Is it at all possible that overall confidence in the presidential election process has plummeted in recent weeks due to the fact that those “wise mandarins”, those “establishment” bigwigs in both parties have become so bold in letting folks know that this “voting thing” by the ignorant masses is just one big circus con intended to keep them entertained and occupied while the really smart people pick the candidates most certain to keep themselves in power and wealth.

Early on the Democrat power brokers unabashedly let it be known that laughable old Bernie Sanders could win as many primaries and caucuses as he wished. But old Bernie wasn’t going to get any meaningful share of “Super Duper Delegates”.
Hillary “owns” them…literally. So, let the show go on. The upside to the faux contest, it keeps a lot of attention off Hillary’s and Obama’s slippery maneuverings which will keep her out of jail and expose less of what Obama actually is.

On the “other side” (there’s a strong case to suggest that there really aren’t two “sides” in Washington, just an increasingly obvious pretense):

The wise guys of the GOP establishment, in near or full panic over their inability to conceal their cynical motivations and control the angry response of their voters, have gone “full monty” this past month in an incredibly public display of their anti-base strategy.

Hoping to portray it as a moral, upstanding, honest, statesmanlike response to the “monstrous” candidacy of Donald Trump, the GOP establishment has offered up their once respected frontmen as sacrificial lambs in order to keep their scam going.

The transparency of the establishment’s effort is so laughable one must applaud people like JEB, Lindsey, and the hapless Mitt for their ability to say their assigned “endorsement of Ted Cruz” lines with straight faces.

And whether it was just a gaffe by some of the GOP’s lesser lights, the statements of a convention delegate or two has demonstrated almost unbelievable contempt for the party’s base. They’ve actually revealed the party’s view that those poor saps who think that their votes in Republican primaries and caucuses actually have any influence on who the GOP nominee is, deserve whatever they get.

In recent days it has become crystal clear what the Washington establishment has developed and begun to implement as a strategy to maintain the political life style to which they’ve become accustomed:

a)  The bi-partisan “Sea Island” conclave apparently agreed that Donald Trump is an unpredictable boor (who can argue with that?)

b)  A little of “The Donald” was OK; It kept the heat and light off Hillary and Obama, and it made the GOP race for the nomination “interesting” since those caucuses and primaries have no bearing on whom the Republican mandarins select as their establishment-approved nominee.

c)  The “Trump thing” has gotten seriously out of hand; it’s time for some ingenious Washington establishment strategy to get this thing back on track

d)  Thus, the agreed upon set of “bi-partisan” priorities:

1.  Stay the course regarding Hillary’s situation; with Democrat cooperation, Gowdy’s Benghazi committee is handling its role superbly, little noise from time to time, some smoke, but no fire, all culminating in…nothing of consequence regarding the Clinton march to the White House.

2.  AG Lynch will play her role, shutting down Comey’s investigation of the Clinton email fiasco at the proper time

3.  Stop Trump short of 1237 delegates; get our guys out there propping up Cruz, but don’t let it go too far or the Party could get stuck with that guy as the nominee. Oh, and Mitt, Lindsey, Jeb…act like you mean it, be ‘sincere’…

4.  Paul (Ryan), do your “sincere, pragmatic, intelligent, wise, really really conservative” shtick; disavow any interest in accepting the nomination until we tell you

5.  Agree on a proper course for the Supreme Court appointment later, let the current course proceed for now

6.  Get as much dirt as can be found or plausibly created on Cruz to eliminate him as a credible actor at the convention; complete the strategy to get him out of the Senate next election

And thus with the short term priorities set, implementation began this past week…a little bit shaky start but with the help of the media, a “proper” national course will be set. Maybe led by Hillary, possibly by Paul, but proceeding on course , regardless.

PRINCETON, N.J. — Thirty percent of Americans say the presidential election process is working as it should, down from 37% in January. The decline is driven mainly by Republicans’ increasingly cynical views as the campaign season has progressed. The percentage of Republicans and Republican-leaning independents who say the election process is working has fallen from 46% to 30% since January. Democrats’ and Democratic leaners’ views haven’t changed.

Does the way the presidential campaign is being conducted make you feel as though the election process is working as it should, or not?   % Yes, as it should

The latest update, based on interviewing conducted March 16-17, shows that Republicans and Democrats now have similarly low levels of belief that the election process is working properly, based on their views of the way the presidential campaign is being conducted. This situation differs from what Gallup found in January,when Republicans were much more positive.