The Hillary fix is in

From the American Thinker

The news that Hillary Clinton’s closest aides have retained well-connected D.C. attorney Beth Wilkinson to represent them in their boss’ email scandal is bad news for those that held out some hope that justice would be done in the case. Instead, their joint hiring of Wilkinson, without objection from the Justice Department, strongly suggests that that Attorney General Loretta Lynch has no intention of pursuing charges against any of them, much less Hillary. The timing and terms of Wilkinson’s hiring have Clinton’s fingerprints all over them, demonstrating once again that when it comes to corruption and pulling strings to escape the consequences, nobody tops the Clintons.      (snip)

“Wilkinson’s joint representation would present a huge conflict of interest if the FBI and Justice Department were actually intent on prosecuting this matter. The best tool available to prosecutors going after a joint criminal enterprise (other than uninvolved eyewitnesses or physical evidence) is the testimony of one suspect against another. This is obtained by interviewing the suspects in isolation, and perhaps misleading them as to the status of the investigation and who has “dropped a dime” on the others. In the Clinton case such a tactic is now impossible, since all of Clinton’s aides will be represented by the same attorney, allowing them to create a joint narrative, and preventing investigators from keeping any of the aides in the dark about what the others may have said. Experienced former federal prosecutor Joseph DiGenova (who a few weeks ago was among those confident a grand jury had been convened) now opines that in accepting this arrangement, Justice has essentially “thrown in the towel.”

Excuse me, but is anybody else tired of hearing what a “standup guy” FBI Director James Comey is?

His real claim to such a reputation is his aggressive actions toward the G W Bush administration. Most notably Comey, as Acting AG, appointed his buddy Patrick Fitzgerald as Special Prosecutor in the Valerie Plame “justice miscarriage”.

Does anybody really believe that Barack Obama would bring anyone into his administration who would be courageous enough to seek real justice with this ‘rat’s nest’?

We’ve made some predictions in the past which did not always turn out to be completely accurate, but we’re willing to try one more: 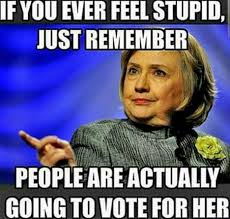 The so-called “investigation’ into the “Hillary email scandal ” will ultimately end the same way that every other “phony” Obama scandal ends…with the GOP looking feckless and foolish and the president and his minions, including that widely acclaimed seeker of justice, Loretta Lynch, saluting the American people with their middle fingers.

Meanwhile Hillary is the nominee, and odds are improved that she becomes America’s “Hillary the First”.