Cruz – pretty good end of week; Trump – not as good a week as he thinks 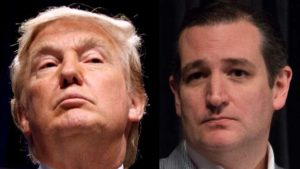 We believe Ted Cruz has generally benefited this week from several factors that have gone his way, or recognition of which will help him build momentum in Indiana and beyond. Donald Trump chalked up some expected primary wins and had some superficial things go his way this week and last, but with sober analysis may be seen as the existing choir clearing its throat with later “unhelpful” developments.

After the April 19 and 26  New York and other Northeast sector primary losses, however expected, Cruz needed to shake some things loose to go his way and have some others fall his way.  They have. Nevertheless, about those primary losses:

True, the New York and NE Republican losses were larger than polling indicated but they were not  seriously contested by Cruz either. It was Trump territory or someone as non-conservative as him. Any hope by Cruz for better than expected percentages was based on hope that that sector of Republicanism had changed. It has not. It is in the water.  It is the same big government,  socially liberal element that has been the bane of conservatism for decades.

It is a very Blue part of the country.  Every state with the exception of Pennsylvania and New Hampshire are rated  “sure Democrat”. The two exceptions are not rated as leaning Republican but “toss-up.” Their electoral vote total is twenty-four.  As we have pointed out, no New York favorite son (Trump) with the exception of truer Kansan Eisenhower,  has brought that state to the Republican presidential fold in over 100 years.

The recent history* of the sector is that the Republicans there have an affinity for moderate candidates as nominees but produce no electoral votes in the general election for the Republican nominee. As in zero /none. Depending on the Republican party rules in each of those states it makes some sense to compete in them if they are proportional in their award of delegates but more so for the favor of delegates when they are unbound.  Because of our electoral college system, there should be no presumption that popularity in the primaries in those states means anything positive for the general. Maybe just the opposite.

The good news for Cruz supporters came midweek, after getting past the last of the Nor’easters.

Trumps late-week attempts at putting Cruz away in Indiana include the following;