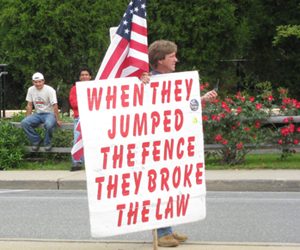 There I was watching the NBC Today Show this morning when the news reader spoke of  drama at tonight’s address by President Trump to a joint session of Congress (and the nation). We were told that some Democrats had invited “undocumented immigrants” as guests and that Trump had invited some family members of several victims of murder at the hands of “undocumented . . . ” (I do not remember if it was said immigrants or residents . . . it wasn’t aliens). 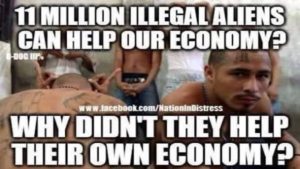 Now if a foreign national is here legally, —  visa, green card, holder, whatever, —  they are required to carry documentation with them or be able to produce it promptly. They would not be referred to as “undocumented” that is unless the media is seriously maintaining that the millions of people they report are here “undocumented” are simply here without a wallet, purse or pocket?

The media knows very well that “undocumented” is their euphemism for illegally present in this country, intended also to be obscure and they use it aggressively because they intend for their political correct narrative to result in amnesty and porous borders. But to refer to the perpetrators of vicious crimes, here illegally, as  “undocumented”  is grotesque goody-goodiness.

Speaker of the House Paul Ryan did a commendable job responding to NBC’s Matt Lauer in an interview in the US Capitol rotunda during the same program.  Lauer was pressing about several matters and Ryan issued his responses aggressively ,certainly not apologetically, clearly and succinctly defending as appropriate and setting Lauer straight on some loaded questions.  Ryan does talk a good game, now if he will just see to the follow-through on his assertions.