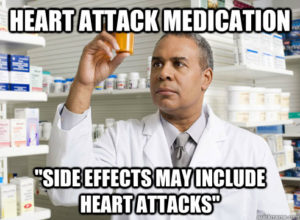 First from The Daily Wire

Trump is certainly A major part of this  but we don’t like the singular reference to the proposal as “Trumpcare” because we have no doubt the particulars are at least as much the result of the representations of squishy Paul Ryan and Mitch “My hands are tied but not Harry Reid’s”  McConnell.

Reading their analysis, and if their predictions come to pass, one can see the Ryan McConnell Trump plan as a cure as bad as the illness that will hurt Republican prospects. We simply have no faith in doctor’s Ryan and McConnell on the matter.

This Heritage Foundation / Daily Signal article does have some helpful prescriptions while being clear in its diagnosis of the illness.

Obamacare’s basic construct is to take control of private health plans and convert them into off-budget extensions of federal programs. Yet, large swaths of the public do not want their private health coverage turned into a regulated public utility.  . . .

In short, the “why” of repealing Obamacare is the need to undo the law’s regulatory takeover of private insurance and to reverse its cost-increasing effects. Viewed from that perspective, the “what” in the House bill, even in its latest iteration, still misses the mark.

While the current legislation would repeal several of Obamacare’s insurance regulations—such as the age-rating restrictions that artificially increase premiums for young adults—it still leaves in place a number of the law’s federal coverage mandates.

Aside from the costs that they add to premiums, the coverage mandate provisions are the centerpiece of Obamacare’s regulatory commandeering structure. Fundamentally, they are a shift in control over health plan design to the federal government.

As long as they remain in place, they not only preempt the ability of states to better regulate their insurance markets, but also serve as the scaffolding for additional federal requirements to be imposed on private health plans in the future.

Furthermore, the House bill also does not adequately remedy the adverse selection problems created by Obamacare.

What is needed is for the legislation to make the ban on pre-existing condition exclusions contingent upon individuals maintaining continuous coverage—the same rules that Congress established for employer group coverage 15 years before Obamacare.

That is the best way to reward responsible people who do the right thing, while dissuading the less responsibly inclined from waiting until they need medical care before enrolling in health insurance.