So now we are deplorable and perverse 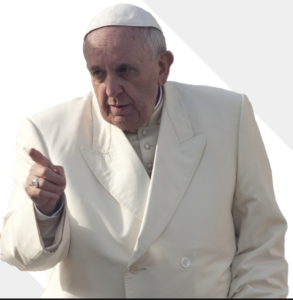 VATICAN CITY (AP) — Pope Francis on Thursday rebuked those who deny the science behind global warming and urged negotiators at climate talks in Germany to avoid falling prey to such “perverse attitudes” and instead accelerate efforts to curb greenhouse gas emissions.

Francis issued a message to the Bonn meeting, which is working to implement the 2015 Paris accord aimed at capping global emissions.

In it, Francis called climate change “one of the most worrisome phenomena that humanity is facing.” He urged negotiators to take action free of special interests and political or economic pressures, and to instead engage in an honest dialogue about the future of the planet.   . . .

That’s right your Holiness, never mind “economic pressures”, that totally evil if not irrelevant concept of cost benefit to mankind. And forgive us our depredations of thinking energy as key to general well-being and that carbon, one of God’s creations and component gifts, is not as bad as you think, and that while you question our motives, that we might question yours.  Even at that how can we even be insulting in that you do not consider Marxism to be all that bad, and not an insult.  But here is something to muse about, perhaps in the form fitting, carbon heated and cooled, Vatican Round Hall from your friends at Town Hall:

Hot Lies in a Cold Winter    (excerpt) (bold our emphasis)

In September, the global oceans recorded a significant drop in sea surface temperature (SST). This remained completely ignored by media houses that were busy with concealing the 20-year global warming hiatus.

What implications do falling temperature levels have on the current hysteria surrounding climate change?

The global SST spiked in 2016 due to the El Nino, but there was no significant increase in temperature. This year, it showed a declining trend and reached 2015 levels by September.

In any case, the current global SST is not any different from those in the interglacial period, thus confirming various other temperature reconstruction studies that show that the modern warm period is not unique.

This decline in temperatures is not exclusive to the sea surface. Land surface temperatures have recorded a similar trend. . . .

Independent research papers published in peer-reviewed academic journals prove that the modern warm period of the 20th century is not dangerous. The Roman Warm Period and the Medieval Warm Period—both of which occurred during the past two millennia—were similar to the current Modern Warm Period.

The case for dangerous climate change gets completely decimated when we consider reconstructed temperatures beyond the past two millennia, with time periods in the past displaying drastically higher temperatures and higher carbon dioxide concentrations. . . .

Quite contrary to the current hysteria, humanity has suffered only when the earth has gone through cold phases—like the mini ice age of the 16th century.

Forgive us our trespasses, including our desire to see low cost abundant energy and opposition to one-world government particularly in a fallen world.

0
This entry was posted in ENERGY & CLIMATE, RELIGION AND GOVERNMENT, UNCATEGORIZED. Bookmark the permalink.