Communism’s utopia — they shoot you for leaving

Thanks to Tom Nelson for the forwarded pictures 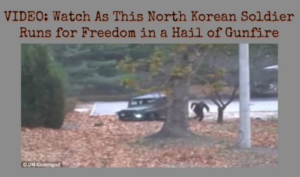 We remember the iconic photo (at left above) of a communist soldier bolting for freedom in the sixties and the Berlin wall that was built to keep non-communists from experiencing the  communist utopia.  The picture at right is a still of a North Korean soldier bolting for freedom in mid-November  The video below shows that soldier driving a military utility vehicle into the “Joint Security Area” along the border between North and South Korea,  getting it stuck and then bolting on foot.  North Korean guards are seen shooting him as he runs and there is infra-red type footage of South Korean guards dragging him to safety.   We excerpt an American Spectator article about the soldier’s medical care that offers compelling insight into the nature of North Korea’s communist dictatorship. We bring this up because today’s youth are kept ignorant of communism’s atrocities and what it portends as it is tyrannical at its core. We also reference a “Politically Incorrect Guide” that should be required reading in high school.

The Man Who Sprinted Out of North Korea   by Thomas J. Craughwell December 27, 2017

The defector, Oh Chong Song, was lucky; he had been airlifted to the trauma unit at Ajou University Hospital, one of the finest in South Korea. Oh suffered from five serious wounds: he was struck in the right knee joint, the triceps, his back, his abdomen, and his chest — the bullet that struck him in the chest went straight through him and came out at the shoulder. His wounds were life-threatening, but the surgical team didn’t recoil until they opened up his abdomen. In Oh’s intestines was a mass of parasites — white, worm-like creatures, a couple of which were ten inches long. By now, no news story that comes out of North Korea should shock us, but the parasites in the stomach of what should have been a perfectly healthy young man — it says an enormous amount about what a vile place on every level is Kim’s prison-state.

Since his surgery, Oh has been suffering from terrible nightmares in which he imagines that he is still in North Korea. Dr. Lee, to remind him that he escaped, that he is safe, has hung a South Korean flag in Oh’s hospital room.

As complicated as Oh’s physical and psychological recovery will be, there are two other issues Dr. Lee has had confront. First, explaining to South Korean government and military officials that they cannot interview Oh about his experiences in the North Korean army until he is mentally stronger. And second, there must be heavy security around Oh at all times. It would not be beyond Kim to send a killer to murder Oh in his hospital room. Remember, Kim is the man who sent assassins to murder his half-brother.

Oh is recovering. He can eat solid food, and sit up in bed. He can even climb out of his bed and walk the few steps to use the bathroom without having to call for assistance.

As for Dr. Lee, he has become a celebrity in South Korea where some have interpreted his care of Oh as an act of patriotism. He told the CNN reporters that is a false impression. “It’s totally wrong,” he said, “as you can see here. We are doing this job every single day.”
I have often wondered why totalitarian regimes wall their citizens inside their hellish nations. So I put the question to my friend, Professor Paul Kengor, author of The Politically Incorrect Guide to Communism.

“We have a saying in America,” Paul said, “‘Love it, or leave it.’ In communist countries, they won’t even let you leave…. Bill Bennett likes to talk about ‘the gates test,’ namely: when a nation opens its gates (or borders), in which direction do the people flow? For America, they flow in. For communist countries, they flow out. Look at Cuba: they won’t even let people visit their beaches without surveillance because they fear they’ll jump in the water to start attempting a 100-mile swim to Florida for freedom.

So, why won’t they let their own people leave?

“I really believe the answer is less rational than it is ideological or psychological or even, frankly, spiritual,” Paul said. “These are evil regimes, committed to an evil ideology, period. Thus, they behave in pernicious ways. That’s the best explanation, I believe.”

They don’t teach that in school anymore, but Paul Kengor and Regnery Publishing do what they can to compensate in what is bound to be a growth industry.

The Politically Incorrect Guide to Communism: The Killingest Idea Ever

The author is Paul Kengor, professor of political science at Grove City College, a visiting fellow at the Hoover Institution, and a frequent contributor to this publication. Kengor also travels to other colleges to deliver guest lectures. One of his most popular is entitled “Why Communism Is Bad.”

Now, readers of The American Spectator know why Communism is bad, but Professor Kengor says he runs into quite a few college kids who know nothing about the outrages Communists have inflicted — and still inflict — upon the world. And he thinks he knows why there is glaring gap in his students’ education: high school and college faculties are top-heavy with teachers who describe themselves as liberal or progressive. Traditionally, people of that political persuasion have a higher tolerance for Communism’s claim that it will create a glorious new world order. Of course, a left-leaning instructor who decided to teach on course on the history of Communism might encounter some awkward moments in the classroom: the students might get around to asking pesky questions about the body count that runs to the tens of millions, the suppression of basic human rights, the enslavement of entire nations… you get the idea.

1 Response to Communism’s utopia — they shoot you for leaving