He writes almost inconsolably but Gene needs to know

Roger,
Rejection. It’s a bitter pill. The QC Times declined to print this letter. They noted they’d printed (2) other letters “critical” of their position. I had to look up “critical” in the dictionary. For a second I thought I’d been misusing it all these years.

I sent it in on Oct. 28th. I waited, and waited and waited. Finally, I sent a follow-up email. Oh, we’re not going to use it. Maybe I’m a prima donna, but isn’t it customary to say, “Thanks, but…”? Not to be full of myself, but they pay for drivel less entertaining than my letters.

As for the rejection; Was it something I said?       Gene 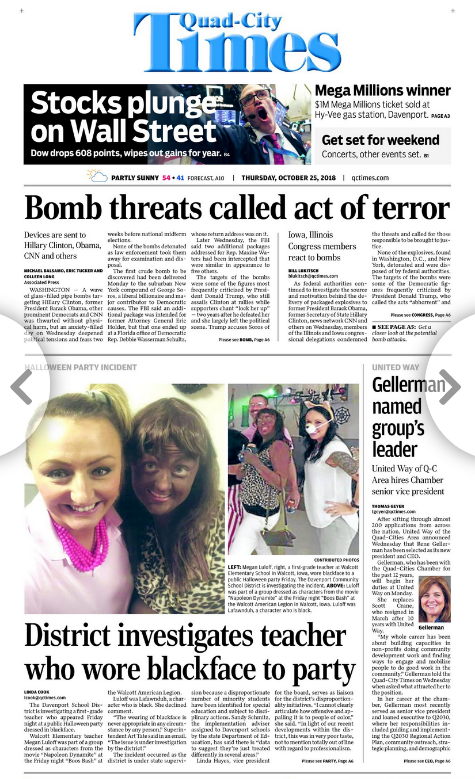 Kudos to the QC Times’ investigative team for exposing one of the area’s most heinous bad-actors, and plastering her photo all over the front page. (Oct. 25th)

What was her crime? Was she: The killer in one of Davenport’s unsolved murders? Involved in a high-speed chase, endangering the lives of innocent motorists? The gunman in one of the almost daily “shots fired” incidents?

Nothing so trivial as that. This villainous vixen went to a costume party as a character from the stupid movie Napoleon Dynamite. Our perpetrator is white, the character she portrayed is black.

We can’t have that. Even worse, when she’s not at costume parties threatening civilization, she’s a teacher. Society isn’t safe with her having contact with young minds.

The school district’s opened an investigation. I’m not sure if they can “lock her up”, but they can ruin her career. The QC Times has already done its number on her reputation. But is that sufficient punishment for such an egregious act?

I was surprised the (ex)superintendent even made a statement. With Davenport’s school district under State supervision over its racial policies, I’d expected, “No comment”.

Someone decided this woman’s “transgression” warranted half of the front page. Has the threshold for destroying someone’s life been lowered to, “exhibited bad taste that led to hurt feelings”? If so, Congratulations.

It got worse, besides the front page treatment they even editorialized about how horrible the act was and how lessons must be learned.

In answer to your question:

Of course readers get our drift and can add their own