“There is no argument that impeachment would enhance America’s position in the world, and no reason to believe it would not have some negative impact on the economy, meaning jobs.” P. Noonan
————————– 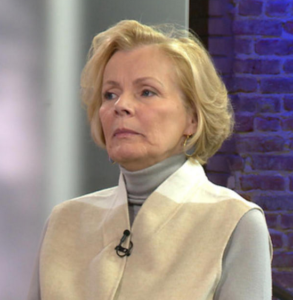 That ‘lovable’ Miss Peggy. She makes assertions with such moral authority and eloquent indignity. The above quote from her latest column illustrates:

Miss Peggy doesn’t like Donald Trump…a lot! But then, Miss Peggy doesn’t like conservatives even more. In fact, Miss Peggy really doesn’t like anybody much, other than herself. She is a bitter, vindictive, smoother version of Kathleen Parker and, marginally less off-putting than George Will or Bill Kristol. Ms. Noonan never got over GW Bush not naming her his ‘co-president’…or at least a very high, influential member of his administration. After all, in Peggy’s mind (only), it was she who really made Ronald Reagan a successful ‘actor-turned-president’.

But back to her most recent column and the above quote.

“…no argument that impeachment would enhance America’s position in the world…”. Instead Noonan proposes her “alternative to impeachment…”congressional censure”, not “political” disapproval, she says, but Congress’s “moral disapproval”!

Congress’s “moral disapproval”!? Congress as the arbiter of “morality”? Oh, come now, Peggy, do you expect to be taken seriously with that?

But, again, more importantly, because of Trump, in Noonan’s mind, America’s “position in the world” needs to be “enhanced”?!

Does Ms. Peggy mean “enhance” as in the manner in which her “hero”, Barack Obama, “enhanced” America’s position in the world…as in, for just one example: Obama, rather than put the “Paris Climate Agreement ” before the Senate to ratify it as a treaty, as the Constitution requires, went to the United Nations to get its approval (as a “non-binding agreement”…NOT a “treaty”) in order to pressure this nation to comply fully with a pact which had not been approved by the designated representatives of the American people! (https://www.globalpolicyjournal.com/blog/26/04/2016/paris-agreement-when-treaty-not-treaty)

And, wasn’t that same seedy, unconstitutional sleight-of-hand used with the Iran Nuclear “agreement’.

And, of course, the dishonesty and the defects of Obama’s sleaze were effectively exposed when President Trump simply exited those ‘faux agreements’ by the same method (only Constitutionally proper that time) Obama used.

The upshot of both Trump actions?

Well, In Peggy Noonan’s mind, and that of Democrats, Trump-haters, and the liberal media, “America’s position in the world” was “diminished”! 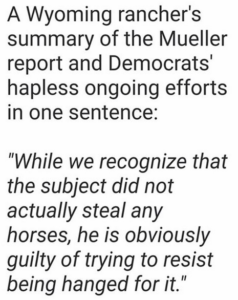 In our view, and that of many Americans, and all who love this country, the world was made safer, the sovereignty of this great nation was preserved, America’s taxpayers were relieved of the burden of carrying on their backs the total global ‘defense’ against the hoax of ” man-made climate change”!

The additional dividend from this action by America’s most effective president in many decades? A new and strong, grudging respect for the last ‘Great Hope for the World”, the United States of America!

So, bring on your “moral disapproval”, through “congressional censure”, Miss Peggy.

Mueller’s Exit and an Impeachment Alternative
Trying to overturn an election would be too divisive. Congress should censure Trump instead.

Republicans, who control the Senate, wouldn’t vote to remove the president, but to morally disapprove of him? They would. There’s plenty of suppressed resentment there at how he’s mortified them and lowered things.

Mr. Mueller is a serious man who in a long career has earned the respect in which he is held. But he’s slipped out of public life on a banana peel, hasn’t he? He was the investigator. He led the probe. He should have advised Attorney General William Barr of his views as to whether the actions of the president merited federal charges, and let Mr. Barr take it from there.

There is no argument that impeachment would enhance America’s position in the world, and no reason to believe it would not have some negative impact on the economy, meaning jobs.

The harrowing part of the Mueller report is part 2, on obstruction of justice. Reading it, you feel sure the president would have loved to subvert the investigation but wasn’t good at it and was thwarted by his staff. There are seemingly dangled pardons and threatened firings. There’s a hapless small-timeness to it, a kind of brute dumbness, and towering over it all is a grubby business deal in Moscow.

Congressional censure would be a formal registering not of Congress’s political disapproval but its moral disapproval. It is a rarely used form of shaming. Congress has censured its own members over the years, including Sen. Joseph McCarthy in 1954—but no president since Andrew Jackson in 1834.

Republicans, who control the Senate, wouldn’t vote to remove the president, but to morally disapprove of him? They would. There’s plenty of suppressed resentment there at how he’s mortified them and lowered things.

That is the less invasive path, the less damaging to the country, the less pointlessly polarizing.