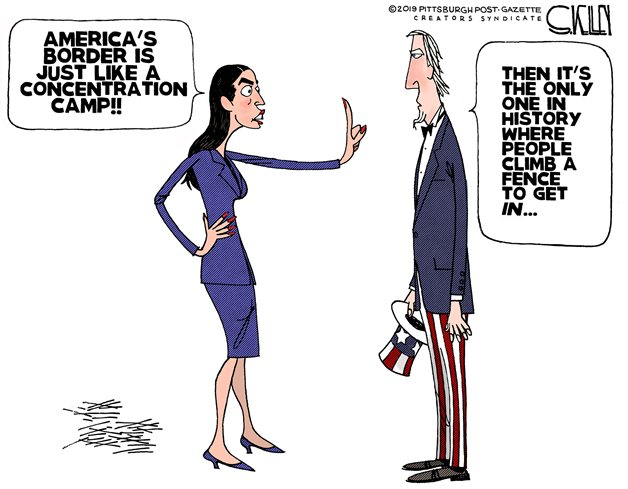 Alexandria Occasional-Cortex* is probably enthralled with the idea that in the socialist paradise she advocates she would be exalted in a position of power and privilege as she is celebrated now. Well maybe, but never in charge, she is just too stupid. She has already risen to the level of her incompetence (loud-mouth bartender to Democrat congressman is not much of a leap anyway).

Jerry Newcombe writing at Townhall has a good column that we pull a few favorite (chilling) quotes from:  The chill extends from some recent polling that indicates just too much acceptance of socialism and or its proponents for comfort. Worse the Democrat Party is essentially socialist incrementally if not revolutionary.

What Is This Love Affair with Socialism? (excerpt)

The problem with socialism and communism is that it must be forced in order to put it into practice. The communists built the Berlin Wall to keep the residents of East Germany from being able to flee “the worker’s paradise” into the West. Trump wants to build a border wall—not to keep people in, but to keep undocumented people out. The fact that so many want to come here is, in part, mute testimony to the success of capitalism.

Dr. Paul Kengor of Grove City College is a best-selling author of many books related to communism. One of his most recent books is called The Politically Incorrect Guide to Communism: The Killingest Idea Ever (Regnery, 2017).

In that book he mentions a joking T-shirt given to him by one of his former students. The T-shirt read, “Communism has only killed 100 million people. Why not give it another shot?”

Kengor points out that we are told repeatedly that the problem with socialism/communism, which consistently fails to “deliver the goods,” only because the right people have not tried it.

Writes Kengor, “Again and again, we’re told that communist philosophy was never the problem. No, it was nasty leaders like Joe Stalin who have given communism a bad name. Stalin, you see, was an aberration. As were, presumably, Lenin, Trotsky, Latsis, Dzerzhinsky [founder of the KGB], Beria, Bulganin, Khrushchev, Voroshilov, Malenkov, Mikoyan, Brezhnev, Andropov, Chernenko, Chebrikov, Ulbricht, Ceausescu, Tito, Hoxha, Dimitrov, Zhivkov, Mao, Pol Pot, Ho Chi Minh, Mengistu Mariam, Kim Il-Sun, Kim Jong Il, Kim Jong Un, Fidel, Raul, and Che….” And, of course, this would also include Hugo Chavez and General Maduro, who have presided over Venezuela’s destruction, as it went from the best economy of Latin America to the worst—precisely because of socialism.

Kengor concludes: “You would think at least one commie, somewhere along the line, would have gotten it right. Why such ugly results if the theory is so pretty? Can’t these geniuses read?”

Kurt Schlichter also at Townhall writes in a positive vein

Trump’s path to reelection is blazingly obvious – avoid mistakes (like some new war) while focusing on the new normal of economic prosperity. Ask the Reagan Question: “Are you better off now than you were four years ago?”

For Normals, the answer is yes, yes, yes.

Yet Trump remains the change agent in the campaign. It’s the Democrats who are the party of the status quo, the sorry state of the union pre-2016.

Declarations of how much we Normal people suck.

That’s their platform. It’s not very appealing in places where people have jobs that involve sweating and headgear. And while the Dems may run up 60%-70% margins among baristas and public employee union parasites in the blue states, who cares?

Thank you again, Founders, for the wisdom to set up a system to keep us from being ruled by the freaks in New York City and Scat Francisco!

I wasn’t a Trump supporter until he beat my guy Cruz. He earned my support by keeping his promises and running up the score. But my assessment of his chances is objective, not subjective. The competition is going to get crushed. That’s a fact.

Take their doddering frontrunner. Floppy Sleepy Gropey Joe has proven himself good at only one thing – accumulating unflattering adjectives. He’s been in Washington, DC, for 50 years and now he’s noticed that it’s a bubbling cesspool of incompetence, arrogance and failure? And he’s the one who’s going to fix it? Gee, what’s his hurry?

If it was some soft, effete Fredocon Republican running for the honor of losing like a gentleman, you know our nominee would never be so impolite as to mention how Pete E. Neuman or Pocahantas or whoever is promising to bring back an era of misery. But Trump will. He’s no sissy like Mitt. Can you imagine if Candy Crowley had piped up at Trump? He’d have crushed her with binders full of tweets.

Trump will trumpet his successes shamelessly, which is exactly what we need. We need a promoter, a loud and proud conservative who’s not worried that the swells at the country club might find him “Oh well I never!”

He’s not ashamed to win. In fact, he cannot conceive of doing anything else.

Has anyone ever said that about Jeb!?

Winning will happen because we are going to nominate a fighter, a guy who knows how to win, a guy who they said couldn’t beat Hillary.

Then they said he was going to be marched out of the White House by the Grand Wizard of the Supreme Court for treason and emoluments and stuff.

They keep counting him out.

But he keeps winning.

Of course, if Trump loses – if they manage to cheat their way to victory – we’re that much closer to the nightmare I write about in my action-packed yet super-snarky novels about the United States’ split into red and blue countries, People’s Republic, Indian Country and Wildfire. Not surprisingly, liberals and the sad Loser Boat crew from the failed Weekly Standard hailed my novels as “Appalling.” So make your vote count!