Will the Democrat Presidential nominee be Michelle Obama? 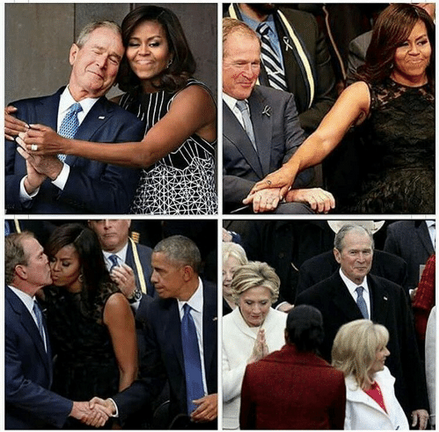 And will GW risk it all for Moochelle?

Readers poll.  Readers may include why they might think Michele will or will not be the Dem Party’s choice. We will tally results as No; Not likely; She could be talked into it; Likely; and She is already in just waiting to play savior. Vote in comments section, we will only report percentages. Comments will be posted if you desire.

Introducing the Democrat Party’s nomination for president in 2020!
As Norman Podhoretz, one of the “founders of neoconservatism” told the editor of the Claremont review of Books, “(I predict)…the Democratic candidate in 2020 is going to be Michele Obama, and all these people knocking themselves out are wasting their time and money.The minute she announces, that will be it.”

I share that prediction, with great alarm and fear for the future of America if I am correct. If you thought Barack was a near fatal blow to America, wait’ll you see the utter destruction Michele will bring to this great nation…its culture, its values, its proud history, the freedom its citizens will have once enjoyed. 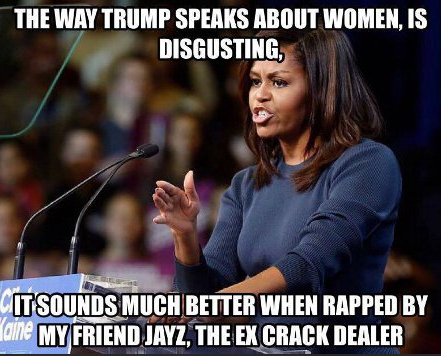 Not likely – although BO was no Energizer bunny at the job, lots of vacations and all, Michelle likes the lifestyle of no responsibility (the media would of course cover for her and give her undeserved credit at every turn but she would still have to get up in the morning).

The radical left would accede and she may even be their best chance but she would lose and it would be humiliating. She knows it and does not want that.  I do think the innate bitterness she exudes would be fun to watch.

Six Democratic presidential candidates took the stage at the Essence Festival on Saturday, but it was a former inhabitant of the White House who got a rock star’s welcome — regardless of her tendency to deflect questions on the 2020 election.

Former first lady Michelle Obama refused to comment on the Kamala Harris-Joe Biden “dust up,” as moderator Gayle King called it, Saturday night, but Obama did reiterate a lot of her opinions surrounding the current political climate with a lot of color and to a lot of applause.

Biden, President Barack Obama’s vice president, apologized for the first time Saturday for comments he made weeks ago about working with segregationists in Congress during the 1970s.

Sen. Harris, the only black woman in the Senate, took special exception to Biden’s comments during the first Democratic debate two weeks ago.

“I’ve been doing this rodeo far too long,” Obama responded to King’s question about the tiff. “And no comment.”

The former first lady also said her and her husband would not be endorsing any candidate from the crowded field, saying they would support whomever wins the primary.

“Barack and I are going to support whoever wins the primary, so … our primary focus is letting the primary process play out, because it’s very early,” she said. “I mean, that’s one of the things that we learned in the campaign. It is early; it’s like trying to figure out who’s winning the World Series on the first seven games. I mean that’s where we are right now, it is so early.”

(MORE: Michelle Obama’s ‘Becoming’ could be ‘most successful memoir in history,’ publisher says)

Barack Obama had previously said he did not intend to endorse his former vice president early. And Biden said he asked the former president not to.

“I didn’t want it to look like he was putting his thumb on the scale,” the former vice president told “The View” in April.

While staying mostly out of current politics, Michelle Obama did manage to take a not-so-subtle jab at the man now in the White House.

“The leader of the free world, with a tweet, can start a war, can crush an economy, can change the future of our children,” she said. “It is a real job which requires deep seriousness and focus.”

She has criticized President Donald Trump before and said in her recent memoir, “Becoming,” she will never forgive him for the birther controversy he helped to perpetuate in the years prior to his campaign.

But Michelle Obama spent much of her time on stage at the Mercedes-Benz Superdome discussing voting rates among African Americans and urging those in attendance to get to the polls next year.

“I fear that sometimes people might have thought that Barack made it look easy, so it must be easy, It’s kind of like, I guess, if the black guy can do it, anybody can do it. And that’s not true,” she said to laughs from the mostly African American crowd.
She closed with a message of motivation for the crowd.

“I feel the power in the Superdome right here,” she said. “I feel it. I feel it right now. If each of us does our part and we go out there and we get educated and we register and we get people registered to vote. We can change things.”

1 Response to Will the Democrat Presidential nominee be Michelle Obama?