Leftist mob action will get worse 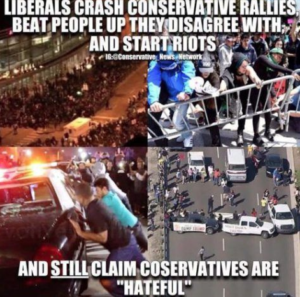 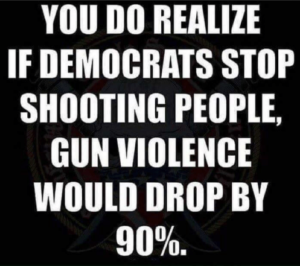 How anything more than this should even be necessary to convince an overwhelming number of American voters (at least those who are citizens). The Democratic Party is now home to some of our nation’s history’s most dangerous, irresponsibly ambitious dimwits, who have ‘volunteered to be President. The willingness to consider electing one of these can only be explained by an all pervasive gullibility and/or craven self-indulgence that is currently raging in that political party.

America can only hope that only legally eligible American citizens (the overwhelmingly sensible ones) comprise the electorate in 2020.     DLH

Political Forecast: Stormy Weather Ahead      (excerpt, posters not in original)

. . .   An online poster whose identity is unknown to me summed up the party’s unappealing agenda rather neatly, I think:

1. Fred Stevens, a welder, and Joe Frisco, a bartender, neither of whom went to college, will have to pay off the student loans for Eric, an Art History major, and Emma, a Gender Studies major, because they cannot get jobs. (Elizabeth Warren).

2. Yusef Hussein, who killed 23 children by bombing their school, will be allowed to vote from prison. (Bernie Sanders)

3. Grace Thompson, who worked hard for 47 years, must give up her employer furnished medical plan and join the National Health plan. (The whole slate)

4. La’Darius Washington, who has never had a regular job, will receive a monthly income from the federal government to spend as he pleases. (Amy Klobuchar)

5. Billy White, age 16, who has trouble with subject/verb agreement in English class, still has trouble with fractions in math class, and thinks Judge Judy is on the Supreme Court will get to vote. (Kirsten Gillibrand)

6. Stan Billings, an avid deer hunter, will have his semi-automatic rifle (fires one shot each time you pull the trigger) taken away, or go to jail, because it looks like an AR 15. (The entire slate)

7. Sven Johannson, whose grandfather immigrated to the US in 1953 will have to pay reparations to Sha’lyndia Jefferson because she THINKS her great-great-great grandfather MIGHT HAVE BEEN a slave. (Cory Booker)

8. Thomas Finch, who is an ambitious and motivated adult, cannot get a job because he doesn’t want to join a labor union. (Kamala Harris)

9. Sammy Thomas, a farmer, will no longer be able to haul his crops to market in his 3/4 ton diesel pick-up, but will have to make 43 trips in his Toyota Prius. (The whole slate)

10. The population of the US will become 76.4% Hispanic because all of the existing border wall will be torn down. (Beto O’Rourke)

11. NONE OF THIS WILL MATTER BECAUSE THE WORLD IS GOING TO END IN TWELVE YEARS. (Alexandria Ocasio-Cortez & most of the candidates)      . . .

As the summer days wane, there’s going to be no end to the political heat waves. We learned this week that Ruth Bader Ginsburg was being treated the past three weeks for a recurrence of her pancreatic cancer. I wish her no ill in her continuing health issues, but given her age and series of cancers, it is unclear how long she can continue her duties on the Supreme Court.

A nomination battle for a replacement would surely make the outrageous Kavanaugh hearings seem mild in comparison.

Will the leftist twits who follow them try to impress them /each other with “direct action”?