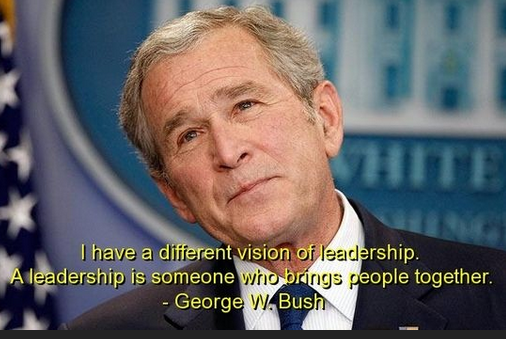 Bush in retirement not the great communicator, more the great equivocator and “platitudner”  R Mall

Trump: Where Was Bush’s Desire for ‘Non-Partisanship’ during the Impeachment fiasco?

A call by former President George W. Bush for humanity to jettison partisanship amid the Chinese coronavirus pandemic has drawn a sharp rebuke from President Donald Trump.

Bush published a video message on Saturday urging unity and togetherness amid the coronavirus’ outbreak, which received 4.4 million views on Twitter as of Sunday morning.

Bush’s plea amounted to a call for people to ignore partisanship to protect the most vulnerable and to assist those who have become unemployed. He based his plaintive call on the observation we are all God’s children and therefore equal of merit and support.

“[L]et us remember how small our differences are in the face of this shared threat,” Bush said. “In the final analysis we are not partisan combatants, we are human beings equally vulnerable and equally wonderful in the sight of God. We rise or fall together, and we are determined to rise.”

The president’s response was straight to the point, outlining Bush’s absence when Trump was being excoriated during his impeachment proceedings.

“Oh bye the way, I appreciate the message from former President Bush, but where was he during Impeachment calling for putting partisanship aside. @foxandfriends He was nowhere to be found in speaking up against the greatest Hoax in American history!” Trump tweeted.

I would like to ask a few questions of G W Bush:  Who really needs temporizing  —  people who support big government power grabs or those who oppose it?  Who is most likely to listen to your utterances — Republicans or Democrats and who needs your platitudes  more?  Which philosophy has had the more balanced approach and why can you not say so? With references to your timing as to when to address the nation, why are you always so compelled to equivocate regarding motivations of Democrats or assume good will, but not as regards Trump supporters and his policies? Do we need platitudes or sound policy? Or, is one policy or philosophy as good as another?  If I support grabbing national power subverting liberties in the name of saving lives, is that meritorious when the end result can be so devastating? Need to now where you are coming from . . .  if it is a neutral corner when so much is at stake then I am not interested.