Voting Republican across the board this election is the only way to a return to normalcy, toward a conservative agenda and stopping the policies promoted by the worst and most dangerous Democrat field ever at all levels of government. Voting third party, or not voting, are not well reasoned moral options given the stakes this election (unless someones default vote is Democrat and they do not have a freedom loving inkling in their body).

Judges are also on the ballot this election as is a constitutional amendment issue. A recurring feature of V’PAC at election time is to set forth some sort of guide regarding retention vote on judges.  We have done so again as set forth below.

The Iowa Constitution requires, that every ten years the state must automatically place a measure on the ballot asking Iowans if they support holding a constitutional convention to propose changes to the state’s Constitution.

The question on the ballot reads: Shall the following public measure be adopted? Yes No  Shall there be a convention to revise the Constitution, and propose amendment or amendments to same?

The short answer is NO. If we felt there had been serious planning from conservatives to use the opportunity to correct judicially imposed corruptions of the document we would consider supporting it but we have no confidence  in the endeavor and therefore it could be very dangerous.  Other correctives can suffice for this go-around.

Any corrections or additions to this information should be sourced and promptly sent to the comment section of this post at VeritasPAC.com and will be promptly incorporated upon verification. THE INFORMATION SUPPLIED HERE INCLUDES OPINION and could be considered fairly sketchy due to the dearth of information. Our picks are primarily based on party affiliation, primary voting activity, donation records and legal analysis when available. Explanations of column headings and abbreviations are set forth below. 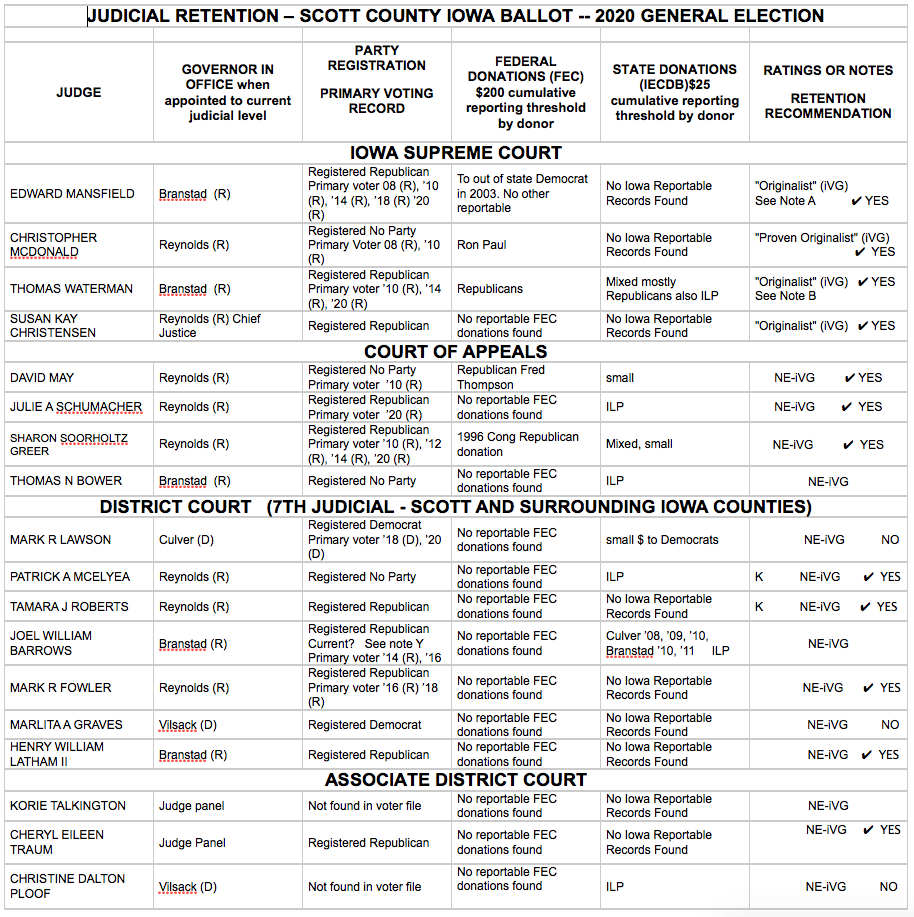 FEDERAL DONATIONS (FEC) $200 cumulative reporting threshold by donor: By judge to political candidates or PACS. Look-up by V’PAC in Federal Election Commission (FEC) Web site. Spousal donations are not indicated here due to reporting vagaries but can sometimes be significant and arguably a proxy. Any corrections sent to V’PAC will be promptly integrated.

STATE DONATIONS (IECDB) In their data base there is a $25 cumulative reporting threshold by donor. The look-up here by V’PAC in the Iowa Ethics Campaign Disclosure Board (IECDB) Web site. Spousal donations not indicated here due to reporting vagaries but can sometimes be significant and arguably a proxy. Any corrections sent to V’PAC will be promptly integrated. ILP = Iowa Law Pac (ILP) is a political action committee catering tothe legal bar.  Donations to it may be intermittent and fairly small unless noted. ILP is not a conservative organization and its interests can often diverge from ours.

RATINGS OR NOTES:   iVG = iVoterGuide.com characterization of judges judicial philosophy as determined by a panel set up by the conservative organization. Any notes or ratings supplied by V’PAC.  “NE-iVG” means not evaluated by Ivoeterguide.com. Checkmark indicates V’PAC support for retention (vote yes) given current political conditions. A blank as to recommendation indicates we are undecided and readers should use their predilections. A “no” indication indicates we do not support retention given current political conditions. Judges are encouraged to publicly announce their judicial philosophy and abide by it. Not doing so they cannot object to misapprehensions. It is our opinion that a no vote on retention can be a safe vote in the face of sketchy information (the fault primarily of the judges) and lack of trustworthy ratings (the fault primarily of the judges) and especially when political conditions are favorable (conservative Republican governor in office). Our recommendations are in the column at right .