Many Trump voters cranky, fed-up, distrusting and not willing to cooperate with “the system” 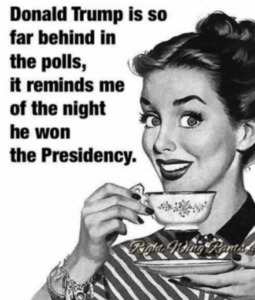 Rousing commentary at American Thinker.  We admit to falling into the author’s categorical description.  Oh we have answered one or two political surveys if we were in the mood this year but we have passed on probably a dozen opportunities. We know it might help our candidates to respond to some extent but often they are lengthy and when we have sat through them we can’t help but be pissed off at the skewed questions and the limited response choices. It is too bad that bad polling drives out better polling.  Thanks to DK for the forward. Graphics not part of American Thinker article.

It seems that each day comes with another well known conservative prognosticator imbibing “doom” shots with “gloom” chasers before breakfast.  “Trump is toast.”  “He’s losing by double digits in the polls.”  “He’s got only himself to blame.”  Quick: Were those 2016 or 2020 opinion ledes?  Trick question: The same people who gave up in 2016 faster than Bill Kristol discovered his inner socialist are already in double-time retreat, rehashing headlines from four years ago and predicting electoral Armageddon for Republicans.  Well, gentle pundits, when the media begin ramping up “Operation Demoralize” to sap the energy from Republican voters right on schedule, and you choose to micturate in your foxholes rather than to affix bayonets, then it’s clear that the battlefield of ideas is no place for anyone who has learned nothing from the four years of war against Trump voters. 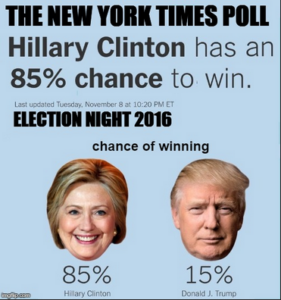 In 2016, the Democrats (and too many establishment Republicans) didn’t think Trump had a chance in hell.  Even with the election in the bag, Clinton and Obama still unleashed a wild international conspiracy that relied on the CIA, FBI, FISA court, and State Department to perform as extensions of the Democratic Party in an outrageous effort to implicate the Republican candidate as a Russian spy.  When they are certain of victory, the Democrats are willing to frame an opponent for high treason and inflame tensions with a hostile nuclear adversary.  Just what wouldn’t they be willing to do when a second straight loss could cripple their Gramscian takeover of America’s constitutional republic as founded?

In 2016, Obama’s legacy, Scalia’s seat, and Hillary’s money-laundering operation at the Clinton Foundation were on the line.  In 2020, what isn’t on the line?

The Democrats have ditched their mild-mannered, blue-collar, “can’t we all just get along” façade for in-your-face “give us what we want now” socialist revolution at any cost.  They’ve gone all in on a Green New Deal that gives government bureaucrats control of the economy and the power to turn 2020s Chinese quarantine into a permanent state of affairs.  They’ve declared the same carbon dioxide we all exhale a national health emergency, not at all different from COVID-19.  They’ve declared systemic white supremacy and patriarchy health emergencies, too.  They’ve declared that math is racist, that police forces must be abolished, and that abortions must be permitted after childbirth.  They’ve unleashed an army of Antifa and BLM insurgents to intimidate Americans through mayhem and violence, and they accuse shocked observers who object to having their businesses looted and burned to the ground of being unreasonable bigots. 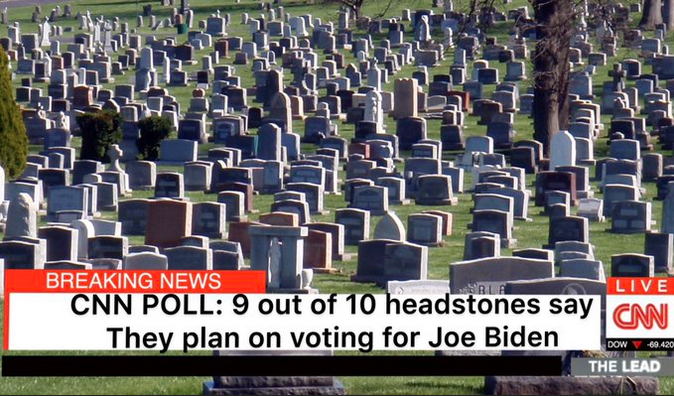 When the Democrats aren’t toppling statues of American heroes or preparing to pack the Supreme Court with comrade communists certain to find the Constitution unconstitutional, they are actively censoring free speech, using the criminal justice system to persecute their foes, and threatening to kill conservatives one by one.  The Democrats may enforce mask mandates like the little authoritarians they are, but they’ve let their own political masks slip for good.  Gone are the days when they were willing to pretend to be part of a peaceful and American political party, loyal to the Constitution and laws of the land.  They are an insurrectionist force now, intent on destroying the America that exists today through any means necessary.

As Senator Ron Johnson said days ago, this election is “for all the marbles.”  So now is no time to go wobbly.

“Psychological warfare” is not some book chapter from a long ago war; it is what America endures this very moment.  Everything about the 2020 election is an exercise in mentally torturing Trump voters and wearing down his support until surrender seems preferable, if not inevitable.  The plague, the urban insurrection, the constant drumbeat of bad news will all disappear if Republicans only acquiesce to being ruled over permanently.  It’s just a little prick; you won’t feel a thing.  Every message pumped out by the mainstream media and echoed word for word by Democrat operatives posing as reporters is just propaganda meant to demoralize, not inform.  Twitter and Facebook and CNN and The New York Times are all now just 2020 versions of Tokyo Rose, pleading with law-abiding Americans to submit or suffer.  Every poll will be pushed to dampen Republican turnout.  Every state contest will be framed as already over for Republican candidates.  “Operation Demoralize” will stay with us until we win.

But we will win.

When you look around today, does enthusiasm for President Trump seem tempered since 2016?  Do you know of anyone who voted for the president four years ago who plans on sitting this one out or choosing Biden?  From my vantage point, enthusiasm for this presidency has never been higher, and I’ve never encountered a disillusioned Trump voter.  Quite the opposite, actually.  I’ve come across plenty of lifelong Republicans who stayed silent in 2016 or begrudgingly pulled the lever for the president who now would walk barefoot a thousand miles to make sure he stays in office.  I’ve come across first-time Republicans whose eyes have been opened by President Trump, and I’ve seen Democrats who finally realize how anti-American their old party has become.  I know there are plenty of Americans who view this election as their only way of fighting back in a war that has been waged against all of us since 2016.  And I see more Americans than ever who refuse to continue being backed into a corner by a political system that seems intent on their silence.  These are not the conditions that foretell defeat at the polls.

And if polling data truly indicate otherwise, then it is not because of a “shy Trump voter” skewing results toward Biden.  It is because of a fed-up Trump voter who is so angry at the institutions of power that have conspired to nullify the 2016 election that sticking it to those same institutions now seems only just and fair.  When supporting the president can get you kicked out of school and displaying the American flag invites attacks from Democrat operatives, we are becoming a country where the only appropriate response to a stranger seeking to sort citizens into political categories consists simply of name, rank, and serial number.  I think Trump voters are no longer willing to help pollsters figure out how to manipulate them next.  I believe Trump voters plan to speak as one on November 3.