Wealthy Patrick Mahomes — fanboy of communist dictator – no irony there

Whatever you do, don’t practice what your ‘idol’ (Dimitri) preaches

Unlike many Chiefs fans in the KC area, I was aware of Patrick Mahomes’ leftist leanings. After all, what young sports superstar can resist… toasted by Hollywood’s most outspoken ‘woke’ celebrities, fawned over by the media, ‘adored’ by the fans, regardless of his political naïveté.

Careful there, Patrick… what, or who, you wish for.. least of all someone you seem to admire enough to hang his picture in your luxurious master bathroom. (see earlier post) 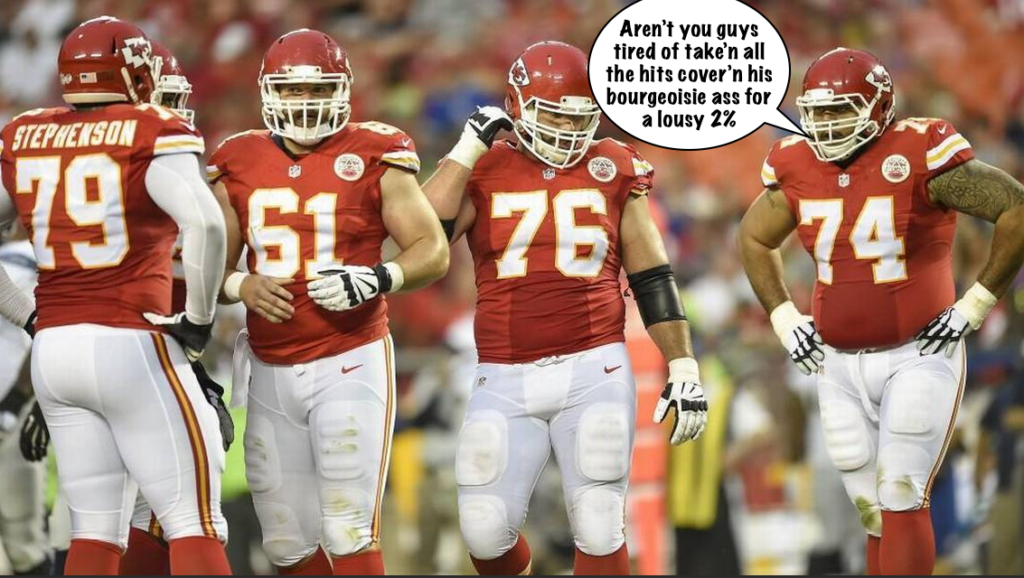 As the Chief’s quarterback, Patrick, you should realize that, in Dimitri Lenin’s world, you are “bourgeoisie”*; your teammates, especially the offensive line, and to a great extent, also, your receivers and running backs are the “proletariat”*!

With your new contract, you are earning $50 million plus, per year…many would consider that “wealth”.

But, your offensive line, the people who protect you from 300 lb. ‘blitzing’ linebackers so that you can perform your passing (and running) “magic” make, on the average, ‘only’ about $1 million a year. That’s two percent of your salary, and they will take more of a beating.

By the standards of the folks who pay $35 to $60 for parking for a game at Arrowhead stadium and a minimum of $45 for a regular season ‘nosebleed’ seat to watch you and your teammates, that isn’t a bad paycheck either.

But, Center Dan Kilgore delivers maybe 50 to 100 well placed ‘snaps’ per game and then blocks the 350 lb, guard from ‘sacking’ you, he makes a paltry $750,000/year… less than one fifth of what you do…maybe you’d better hope that he doesn’t come to embrace the ideological stance that you and your ‘hero’, Dimitri Lenin do:

Furthermore, how would Comrade Lenin look upon your new home?:

“Money is … not only the object but also the fountainhead of greed.”

And, “Private property has made us so stupid and partial… “

(Or how about the ‘darling’ of that political party whose views you seem to share, Elizabeth “Pocohantas” Warren. Her sentiment for example, might sound like this in your world, Patrick:

“YOU didn’t build that stadium you play in…taxpayers did! They should get in games for free!”

And, “YOU didn’t stop that beefy ‘front four’ so that you could toss a touchdown pass without getting your jersey dirty!…your ‘underpaid’ offensive line did!”!      dlh