Now the WSJ tells us! 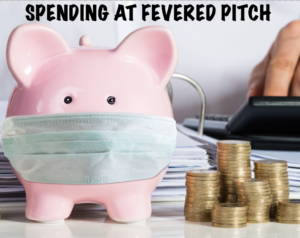 THE WALL STREET JOURNAL SPENT THE LAST 4 YEARS TRYING TO COMPLETELY DISCREDIT THE TRUMP PRESIDENCY, AND THE MAN HIMSELF:

Those two Georgia Senate races were more expensive than even we thought. “With interest rates at historic lows, we can not afford inaction,” President-elect Joe Biden declared Thursday night. He wasn’t kidding as he outlined a $1.9 trillion Covid spending plan, which comes on top of the $900 billion Congress appropriated last month, and the $2.9 trillion in the spring. And this is only Mr. Biden’s “first installment,” as Sen. Bernie Sanders put it.

The first point to understand is that this blowout has nothing to do with economic stimulus. Nearly all of the money is for income redistribution—some to people in genuine need, but most to advance long-term Democratic social policies, and to massage constituencies like teachers unions and state politicians.

This may boost short-term consumer demand, which is already poised to explode once the pandemic eases. But it won’t change incentives for growth because people don’t change their behavior unless they expect long-term earnings to change, as John Cogan and John Taylor described Friday on these pages.

More government spending will only help the economy to the extent it ends the pandemic faster and helps people get back to work. Toward that end Mr. Biden proposes $70 billion for vaccines, therapies and testing in addition to the $42 billion that Congress passed last month. This will make a difference if it delivers vaccines faster, though the main bottlenecks now are bureaucratic and political. Ditto for therapies. The Food and Drug Administration restricts access to monoclonal antibodies for hospitalized patients, for example, but local governments have struggled to set up non-hospital infusion sites.

Most of the rest of the Biden plan is a repeat of the 2009 Obama plan—doubled. State and local governments will get $350 billion, though many have more revenue than before the pandemic thanks to buoyant equity and housing markets. State and local non-education employment has fallen 3.7% since February compared to 6.5% for private business.

Schools that stayed closed (and laid off employees) will be rewarded with $130 billion to open—with no guarantees that they will. This is a payoff to unions that have refused to open schools even as most private schools have. Public and historically black colleges will get $35 billion, but nada for private schools.

One of his worst ideas is to raise the $300 weekly federal unemployment benefits enhancement to $400 and extend it through September. Half of unemployed Americans will earn more with the extra $400 than by working, which may help explain why benefit claims this week surged after the $300 fillip was reinstated. Claims plunged last fall after the $300 lapsed. Many businesses say they can’t pay enough to lure employees back until the payments end.

Mr. Biden also wants to raise the minimum wage to a uniform $15 an hour nationwide. It’s hard to imagine a more destructive policy for small businesses struggling to survive, especially in rural areas and mid-America states with lower wage levels than New York City. The strange economic logic seems to be to make it more expensive for businesses to rehire workers while giving those workers less incentive to return to work.

Mr. Biden plans to make it up to minority-owned small businesses with $190 billion in “equitably” distributed loans and grants. But if this is doled out based on race, it could be unconstitutional. The Paycheck Protection Program was a far better, and less political, way to help small business.
He also prescribes another round of transfer payments including $1,400 checks for most Americans, most of whom have jobs. This will cost some $400 billion or so with almost no larger economic benefit.

He also wants to expand the earned-income tax credit for childless adults, a fully refundable $3,000 child tax credit ($3,600 for kids under 6), a larger ObamaCare premium tax credit and a $4,000 child-care tax credit. This is Democratic social policy traveling as temporary Covid relief. Don’t be surprised if the tax credits all become permanent features of the tax code—and a disincentive to earn more at the risk of losing the credits as they phase out.

As a political matter, Mr. Biden’s timing couldn’t be more fortunate. The pandemic damaged the Trump Presidency, and now he is taking office as the vaccines are rolling out and a return to normal life is at least in sight. When the pandemic does ease, the economy is poised to take off without a single dollar more in government spending. Pent-up consumer demand—the savings rate is already double what it was pre-Covid—and the desire to socialize and travel again will lead to a sharp 2021 rebound even if Congress does nothing.

Yet to sell his plan Mr. Biden portrays the pre-Covid economy as some dystopia of haves and have-nots. The truth is that the jobless rate was 3.7%, wages were rising faster for average workers than for the affluent, and black and Hispanic poverty rates hit record lows in 2019. By the way, aggregate private wages and salaries were higher last November than in February as businesses increased wages, including for lower-paying jobs.