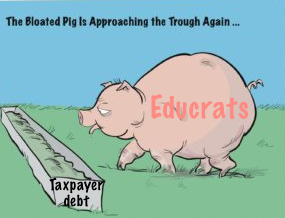 Ballot issue which we oppose because of lack of confidence in educrat establishment, especially their profligacy.

Shall the Eastern Iowa Community College District (Merged Area IX) in the Counties of Cedar, Clinton, Dubuque, Jackson, Johnson, Louisa, Muscatine and Scott, State of Iowa, be authorized to construct, erect, remodel, repair, renovate, furnish, and equip Career and Technical Education facilities buildings at various locations throughout the Merged Area; to improve CTE programming at those sites; and issue its school bonds in an amount not exceeding $40,000,000 for such purposes?

Educrats should have offered  taxpayers an alternate plan – as in absorb and redirect and then perhaps ask for a reduced amount.

A Scott County Republican communication* had this to say mid-morning about the reduction of voting locations:

Roxanna Moritz is once again violating Iowa law!  Iowa statute 47.1.2b, passed last year, requires that a county auditor must not reduce polling places by more than thirty-five percent.  For today’s Special Election she should have 41 polling places open and there are just 12.  Tell her to quit suppressing the vote, especially in the rural areas which are hit the hardest.  People do not have access to the polls like they should!  It is important that you call today 563-326-8631 and let her know she needs to follow the law!

We also encourage readers to contact the Scott County Attorney and demand an investigation.

* This post has two purposes –  to report on the high-handed activity of Democrat Auditor Moritz and to briefly give our opinion of the bonding referendum.  It should be understood that the Scott County Republican commentary was limited to Moritz’s violations of law.  We do not know if the organization has taken a position on the specific bond proposal.