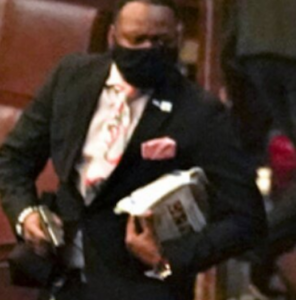 PHOTO OF CAPITOL POLICE OFFICER AS IDENTIFIED BY THE GATEWAY PUNDIT AS ASHLI BABBITT SHOOTER. LINK BELOW

Without his identity even disclosed, the “Justice” Dept. “investigated” and seemed to find “no problem that an unarmed, white, military veteran female was gunned down in the “Peoples’ House” (It’s ‘official name is, The Nation’s Capitol”.

The attorney for the Babbitt family said: “It is clear from video footage that Ashli did not pose a danger to the officer, or any other person, when she was shot. Ashli was unarmed. She did not assault anyone. She did not threaten to harm anyone. There was no excuse for taking her life,” he added.

These are just some of the questions that certain basketball players, really stupid television “hostesses, Liberal Fox News shills, and radical anti-America congresspeople should be asked… and be required to answer about that Capitol Police Officer who shot and killed the unarmed Ashli Babbit?….

– Juan, Is it safe for white folks to visit the Nation’s Capitol?

– Oh, and then there’s April Ryan another journalist too stupid for even the NBA:

“He could have saved her,” Ryan claimed during the discussion. “He could’ve shot her in the leg.”

Could it be that the Capitol Police Officer was Black and the victim was White? (A number of sources have identified the shooter of Ms. Babbitt as an “African-American”.)

Unlike in other cases of police shootings, which involved “Unarmed” Blacks, the name of the Babbitt killer has not been disclosed…and the “mainstream media” has not asked, or expressed the slightest interest.

Also, a question we have, did the Capitol Police Officer think he was firing a “Taser” at Ms. Babbitt, and mistakenly fired his Glock (or whatever deadly service weapon)?

We knew right away, in spite of the likelihood of racially charged outrage that it was officer Kim Potter who shot Daunte Wright in Minnesota. We know she apparently thought she was firing her taser at Mr. Wright and not her gun.

Now, we don’t think that the Capitol police officer killed Ms. Babbitt because of his “racism’…any more than we believe Minneapolis Police Officer Chauvin was responsible for the death of George Floyd because of “racism”. We also do not believe the 26 year veteran police officer, Kim Potter, in Brooklyn Center who shot and killed Daunte Wright, was acting out of racist motives.

In each of these cases, Chauvin, Potter, and the Capitol Police officer who killed Babbitt, we believe they were negligent, careless, panicked, or unfit temperamentally or emotionally for the awesome responsibility they hold (or held). Maybe it was a combination of some or all of these, different perhaps in each case. None of the situations required lethal force as each unfolded and in at least two of them, Chauvin and Potter, as far as we know, none was intended.

In the case of the Columbus shooting of 16 year old Ma’Khia Bryant, we believe all evidence indicates the officer, identified as Nicholas Reardon, did the right thing, the only thing he could do in the split second available to him wading into a lethal scenario only seconds before. In so doing he saved the life of a Black teen…and should be hailed for his action under incredibly difficult and stressful circumstances.  Links  here  and  here .

“It is clear from video footage that Ashli did not pose a danger to the officer, or any other person, when she was shot. Ashli was unarmed. She did not assault anyone. She did not threaten to harm anyone. There was no excuse for taking her life,” he added.

“It is a universal law enforcement standard that a police officer should use no more force than necessary to accomplish a lawful purpose,” Roberts continued. “At 5′ 2″ tall and 110 pounds, an arrest of Ashli could have been accomplished by a single trained officer with a set of handcuffs. At the time of the shooting, there were over a half-dozen police officers in close proximity to the Speaker’s door where Ashli was standing.”

“Some of those officers had just allowed protesters access to the door by stepping aside,” he added. “Other officers, dressed in full tactical gear, stood among the protesters just a few feet behind the door. Still others stood casually at the opposite end of the Speaker’s Lobby, unconcerned with the activities of Ashli and the protesters around her.”

As much as we think Pelosi and her praetorian guard would have liked to prevent media from publishing photos of the shooter of Ashli Babbitt from their ranks, ( given that at this writing Pelosi will not even release his name) — they didn’t object as far as we know to showing Ashli being killed — we suspect as a warning to others.  Nevertheless they could not prevent these photos published at The Gateway Pundit and TGP’s accompanying story.

Any readers experienced in law enforcement who would offer additional annotations to the photos in the TGP article above would be appreciated.  We have some non-professional observations we may impart in another post.    R Mall