Rudy’s words about the FBI raiding his home for “evidence”

Via Newsmax.  Graphic via Terrell Aftermath. 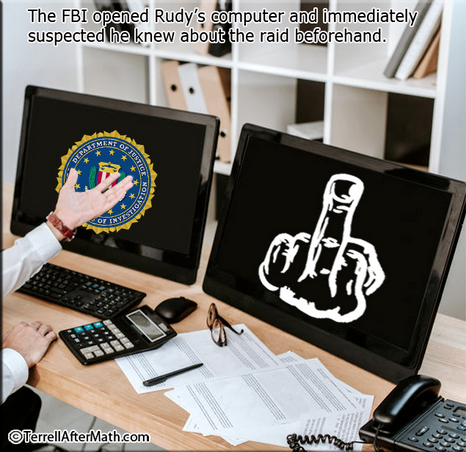 The FBI raided the residence of former President Donald Trump’s personal attorney Rudy Giuliani, who says electronic evidence they already have, were already offered, and ultimately will be “exculpatory” of innocence for any crime for which they might be hunting.

“I’ve known about this for two years, Tucker,” Giuliani told Fox News’ “Tucker Carlson Tonight” of a potential raid, also noting in the interview his iCloud account was “unconstitutionally” raided during his defense of Trump during the impeachment trial.

“I could have destroyed the evidence, but I didn’t destroy the evidence because the evidence is exculpatory. It proves the president and I and all of us are innocent.

Among the crimes the former New York City mayor alleges is an “illegal” warrant for this week’s raid of his apartment and the raid of his iCloud account during the impeachment trial after Trump left office.

“They should be investigated for blatantly violating my constitutional rights, the president’s constitutional rights,” Giuliani told Carlson. “In the middle of the impeachment defense, they invaded, without telling me, my iCloud. They took documents that are privileged, and they unilaterally decided what they could read and not read.

“The prosecutors, the Justice Department, spied on me, and if that is not taken seriously, if that doesn’t result in their being sanctioned, the case being dismissed, and it stopping, this is no longer a free country.

“We might as well be in, you know, East Berlin before the wall fell. This is tactics only known in a dictatorship: Where you see a lawyer’s records right in the middle of his representation of his client. You should be prosecuted and disbarred for that. You should not be prosecuting somebody else.”

While Giuliani did acknowledge “professional” and “apologetic” FBI agents during the 6 a.m. ET raid this week, he noted they refused to take the hard drives Giuliani told them were from the Hunter Biden laptop, despite the warrant demanding the seizure of all electronics. In fact, they didn’t question Giuliani calling them Hunter Biden’s laptop contents.

Giuliani’s legal defense of the illegality of the warrant is based on the fact they have no evidence, as required, to prove he was not willing to turn over anything they wanted.

“The reality is that warrant is completely illegal,” Giuliani said. “The only way you can get a search warrant is if you can show that there is some evidence that the person is going to destroy the evidence, or is going to run away with the evidence.

“Well, I’ve had it for two years and haven’t destroyed it, and they also got it from the iCloud. So, there was no justification for that warrant. It is an illegal, unconstitutional warrant.”