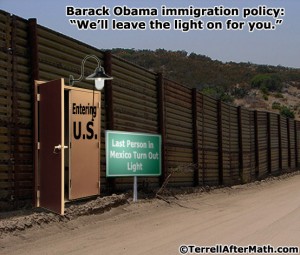 According to the CBO report – why not ??

John Hayword writing at Redstate has this to say about yesterday’s much talked about Congressional Budget Office (CBO) report forecasting (against substantive reason) that added tax revenues  from the Gang of Eight Immigration “reform” bill will exceed welfare cost.  So very much can be said about the assumptions, the internal inconsistencies, the ridiculous static then dynamic “logic”  and the implications of the CBO report even granting its presumptions, but for now this might serve as a brief.  Read the entire worthwhile analysis here.  Bold typeface below my emphasis.    R Mall

The first thing to keep in mind about the Congressional Budget Office estimate of costs and benefits for the “Gang of Eight” immigration bill – or any other estimate the CBO prepares – is that Congress is very good at gaming CBO estimates.  There are lots of little tricks that can be used to hide costs and inflate benefits, once you understand how the CBO is required to analyze legislation.  One of the simplest tricks is hiding the big costs of the bill beyond the standard 10-year window.  This tactic was used to great effect with ObamaCare, leading to absurd performances by talking-points robots who insisted the President’s health care boondoggle would actually reduce the deficit.  ObamaCare looks worse with each passing year, as the 10-year window moves forward, and the more poorly designed components of the legislation self-destruct. . . .

The Congressional Budget Office is saying the exact opposite: bringing this group of illegal immigrants “out of the shadows” will instantly transform them into net tax producers, to the point where they’ll reduce the federal debt burden more than an existing citizen population that can’t manage better than 63 percent labor force participation.  Quibble with either side’s exact numbers if you will – everyone’s ten, twenty, and fifty year projections is going to be filled with a lot of guesswork, and overlook plenty of unknown variables – but which basic model sounds more reasonable?  If amnestied illegals are deficit-slayers, why not throw open the borders and wave everyone through – double the number of illegals and let’s shoot for $1.5 trillion in deficit reduction over the next 20 years!  And even if the CBO model is more fundamentally accurate, why should the existing American electorate be interested in trading lower wages and higher unemployment for a few billion in deficit reduction?