Jill Biden or Kathleen Sebelius, which notorious abortion proponent / right to life opponent will be the next to receive holy communion in the Diocese of Davenport? 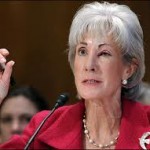 Jill Biden,* the wife of the Vice-President of the United States may not be on quite the level of her husband when it comes to serious thought processes. He is able to spout sophist statements on the world stage that resonate inside his skull along with spewing frequently obtuse statements.  His Catholic wife doubled up on the family tradition this week with at best an inane statement. The context of her statement was encouraging public support of mob action to thwart the Texas legislature. The legislature was engaged in deadline approaching efforts to pass women’s health and safety regulations to end Gosnell like clinics in Texas and protect 20 week and older babies from the hideousness of elective abortion.  To take the public stage in support of elective late term abortion is something nether worldly.

But heck, no foul, she could still no doubt come to Iowa, use her celebrity to champion the continuation of late term abortion in Iowa, as she has done for Texas, and be welcomed as a  communicant in the Cathedral for the Diocese of Davenport.  She would probably be celebrated as her husband was, in the Davenport Catholic Messenger (DCM),  the Diocesan newspaper, an official teaching publication of the Bishop, with an article about her willingness to grace Davenport Catholics with her presence.

There would be no surprise from these quarters that such involvement by her could occur in such context, and should Mrs. Biden consider it expedient to attend and receive communion in a church of the Diocese of Davenport, she would likely be treated in the Catholic Messenger in the same way as they did her husband.

Accordingly, a purpose of being in the state, to protect an abortion regime only exceeded by Red China in its brutality, would be glossed over. The “view from the pews” normalization of ardent pro-abortion Catholics would continue unabated. The appearance of full communion with the Church would be unbridled.

Just as they did in the article linked above, we bet the position of Biden’s bitter half would be described by the DCM as similar to what they described of good ol’ Joe . . .   he would submit to religious authority, but as a lawmaker, he would not impose his religious beliefs on others. In other words they would soft-pedal callousness in service to barbarity.

Note that the DCM  supplied the description, it was not a direct quote. They selected the words. They did not merely allow by way of a quote the diminution of the Church’s position to that of a religious peculiarity, they provided the words. If it were merely a matter of forgetting the quotation marks, why was a statement corrupting the Church’s position allowed un-rebutted?

Through its columnists and editors the DCM has a long history of looking at pro-abortion Democrats, welfare state liberals, through rose colored glasses, and at pro-life Republicans and there economic policies with a jaundiced eye.  But note that there are two things that the Church considers anathema in politicians, racism, the denial of rights based on skin color, and denial of the right to life to the unborn.  Many other issues are arguable, including approaches to economic well being.  But racism and notorious opposition to the right to life we are told imply automatic excommunication.

Indeed Democrat Party faithful even if personally pro-life in a pathetic, check your core values at the door sort of way, provide the caucus strength to help insure that pro-abortion laws stay in effect.  Today, for a variety of reasons, a legislator’s Democrat Party membership itself ought to be considered definitively more suspect of anti-Catholic animation and subterfuge than Free Masonry ever could be accused of.

We are also of the impression that the true religion of most of the so called Catholic Left is the Democrat Party and socialism.  That is based on their utter devotion to the Democrat Party and its socialist driving force, a confiscatory economic and governmental system of the end justifying the means, once considered as abhorrent to sincere Catholics as membership in the Ku Klux Klan.

Our critique here is limited to political effects, and what and how matters are portrayed. How thoroughly the local Bishop’s apparat has ventured into the socialism devotional over the years we do not know. Some are there and don’t even know it. But what we have seen over the years is unmistakeably Democrat apologetics in how they are portrayed.  Furthermore, lobbying entities cannot call for one government program after another, have all of your most animated outreach efforts focused there, organize people to depend on and make demands on government and not become a tool of the Democrat leftist agenda.  It becomes an apparat that essentially recruits for Democrats and will never bite the hand it perceives feeds its goals  — that of Democrat office holders.  The apparat become toadies if not wholly owned subsidiaries of the Democrat machine.

Over the years we have seen succor given to Democrats, their offenses buried, while  antagonisms subtle and blatant inflicted on conservative Republicans through the DCM, its columnists, and other avenues emanating from the chancery. Don’t get us started on St Ambrose University and that interrelation.

The left is drawn to the chanceries where leftist thought is practically institutionalized. This can be in spite of the local bishop, with approval, or obliviousness of the local bishop. Locally the culture has been constant.  We have noticed no effective change one bishop to another over decades.

We do know that there are still elements of the Catholic clergy locally that are not intimidated or bamboozled or overwhelmed by the Catholic Left.  The conservatives hunker down and clergy-on as best they can.      R Mall

* Note – this article was revised after first referencing a falsely attributed quote. We apologize for our error.  The quote now referenced is available at Democrat sites such as the Daily Kos.  The correct quote in context (as does a similar quote at about the same time from Barack Obama) champions mob action and supports continuation of elective late term abortion.

0
This entry was posted in MEDIA BIAS, REPUBLICAN VS DEMOCRAT. Bookmark the permalink.