On the holiest of all secular holidays . . .

Probably out of deep gratitude for having been granted audience with His Highness Barack Obama on Super Bowl Sunday, Bill O’Reilly did one of his patented pandering performances last night.

Magnificent Billy rolled out his “moderate creds” by declaring that the $10 minimum wage was a good idea…or rather, the GOP should get off their silly opposition to it because 10 bucks an hour is “no big deal” for employers. In fact, in his Christlike wisdom, paying anyone less, oh with the exception of teenage workers, is “exploitation”.

This would be kind of a startling position to take for a conservative with any understanding of economics, given the current state of the US economy and the various political and technological dynamics in play…if it were any one but Bill O’Reilly.

But then Bill is neither particularly conservative nor one with much of an understanding of basic economics (Bill has always blamed rises in gasoline prices solely on greedy oil companies and even greedier “speculators”).

Instead this is typical Bill at his arrogant pandering best. Billy should probably read the column in today’s Wall Street Journal, describing the measures employers are already taking to protect razor thin profit margins threatened by Obamacare. Automation is already reducing entry level job opportunities and O’Reilly’s “no big deal $10 wage” will certainly cause an acceleration in them.

Anyone expecting a useful and aggressive interview by O’Reilly  with the Messiah Sunday shouldn’t  bet any money on either San Francisco or New Orleans (oops! they’re not playing).

That Michelle “stuns” is an understatement

And now . . . for our news round up of fashion critiques from this week’s SOTU  . . . where Michelle Obama  “stunned” in an Azzedine Alaïa dress (don’t worry, we don’t know who or what it is either), our favorite critique comes from Jeannie DeAngelis, writing at American Thinker, who does.

” . . . the woman who spends America’s money like a drunken sailor  . . . (and who) . . .    Immediately following the SOTU, Mrs. Obama headed straight to California to fulfill her husband’s call to address “income inequality” by way of fundraising . . .  The nation is a mess, and this woman shows up in haute couture?

The entire article, titled,  Michelle Obama Wore an a- what-a to the SOTU,  delights. 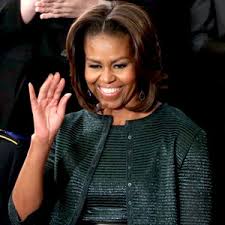 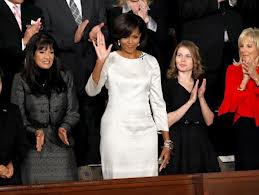 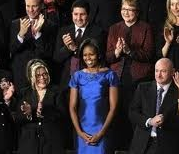 The SOTU Collection — fashion for the 1% of the 1%.   Note that this post and these screen grabs are meant to expose the hypocrisy of limousine socialists,  . . . “grey government for thee . . . couture for me.”