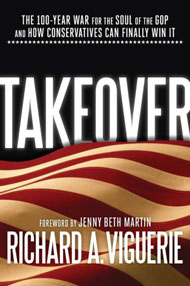 Direct mail guru and conservative activist Richard Vigourie has written a new book Takeover : The 100-Year War for the Soul of the GOP and How Conservatives Can Finally Win It.

From a review by Jenny Beth Martin, co-founder and president of Tea Party Patriots:

Viguerie’s plan is for constitutional conservatives to take over the GOP “so that we may restore the liberty and opportunity that the Founders intended and protect that great document, the United States Constitution.”

“The millions of Americans who are drawn to the tea-party movement understand that progressives in both the Democratic and Republican Parties have usurped power and overrun the Constitution. The Obama administration is the most extreme example of progressive rule, but the road to where we are today was built with the willing participation of establishment Republicans”  . . .

From a book review by Kenric Ward writing  at Watchdog.org Virginia Bureau

Richard Viguerie, one of the old lions of the conservative movement, is restless and a little angry.

From his office in Northern Virginia, the pioneer of direct-mail campaigns sees “establishment Republicans” leading the party to ruin  . . .

“The tea party changed the landscape. If things had been left up to the GOP establishment, Rand Paul, R-Ky., wouldn’t be in the Senate. Neither would Ted Cruz, R-Texas. Instead of Marco Rubio, R-Fla., we’d have Charlie Crist.”“Republicanism lost in 2008 and 2012 because people don’t like big-government Republicans.

Cautioning Paul and Rubio – who have begun talking about a “path to citizenship” for illegal aliens – Viguerie said a GOP retreat on such defining issues as immigration enforcement and amnesty is suicidal.

“It’s the death of the Republican Party if it moves to the Democrats’ position. The Democrats will just keep out-demagoguing the GOP.