The following comments from U.S. Senator Tim Scott of South Carolina were posted in Free Republic.  We have posted a related link following the article which discusses what might be done by minority Republicans with the opportunity presented by the confirmations hearing for Sylvia Mathews Burwell who has been nominated by President Obama to replace HHS Secretary Kathleen Sebelius.

Obamacare Must Go Regardless of Who is Obama’s Next HHS Nominee!

At the end of the day, we all want Americans to have access to affordable, quality healthcare, but Obamacare is the wrong path to get to that goal. 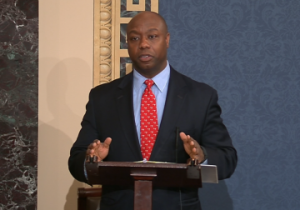 As we begin to review the qualifications and record of President Obama’s new nominee to become HHS Secretary, Sylvia Mathews Burwell, current director of the Office of Management and Budget (OMB), will have to answer a number of very important questions during her upcoming confirmation hearings before both the Senate Health, Education, Labor, and Pensions Committee and the Senate Finance Committee. And while Ms. Burwell was unanimously confirmed to become OMB director, running OMB is vastly different from being HHS Secretary. Frankly, our current state in healthcare demonstrates a complete need to start over—it is unclear whether Ms. Burwell or anyone else could clean up the Obamacare shambles.

Obamacare’s soaring premiums, lost coverage, and the questionable sign up numbers have all become familiar since the law’s enactment. Families and young adults are routinely being priced out of the market, hourly workers are seeing their workweek slashed, and individuals are losing access to a doctor in their community. We know now the promise that if you liked your healthcare, you could keep it turned out not to be true, and even after sinking $1.4 trillion dollars into this program over the next 10 years, there will still be 31 million uninsured Americans.

Throughout this mess, my position has remained clear—I am in favor of a complete repeal of the Affordable Care Act. My voting record speaks for itself and I am proud of my position. I fully believe that the free market has the solutions that we need to help more Americans gain access to healthcare, and the last thing our economy needs is a more intrusive and controlling federal government.

Many on the left, including President Obama, have said there is no alternative to Obamacare. I am here to tell you that isn’t the case. Among the alternatives is the Patient Choice, Affordability, Responsibility, and Empowerment (CARE) Act by my colleagues Senators Burr, Coburn, and Hatch. Their ideas provide a conservative framework of guiding principles for making healthcare work for people—beginning with repealing Obamacare.

At this point, $6.9 billion taxpayer dollars have been spent on the healthcare law, and no one, not the White House, HHS, or the members of Congress who voted for the bill, seem to have a clear idea where all of our money has gone. A full $2 billion has been spent just on efforts to “boost” enrollment and on Healthcare.gov. Of all this, not a single dollar has actually reached a doctor.

Obamacare seeks to make sure everyone has health insurance, though 31 million Americans are projected remain uninsured in 2024, but the negative side effects are huge, and there are a lot of aspects of the problem that it doesn’t address—specifically access to medical care, medical costs, and the formulas we’re using to pay for healthcare.

Healthcare should work for people, not politicians. I have and will consistently oppose Obamacare in my efforts to relieve the American people of the burden this bad law has imposed—for our families, our small businesses, our seniors, and our communities.

A lengthy discussion regarding the ins and outs of what Republicans might do as part of the confirmation hearings process for Mathews-Burwell was posted on Capitol Attitude,  a weekly column written by members of the Fox News Capitol Hill team.

The primary leverage seems to resolve around extending the hearings and perhaps employing a series of “holds” for the purposes of obtaining concessions. The items we thought compelling were document demands heretofore stonewalled or denied and clear public assurances that the administration will “follow the law” as written.  Nominee Mathews-Burwell is a hardened political hack whose experience goes back to the Clinton  years and more recently as the willing provocateur responsible for closing National Parks last year during the budget impasse.   The Obama administration should be made to squirm as much and as long as possible.  R Mall

0
This entry was posted in HEALTHCARE POLICY. Bookmark the permalink.