Last week we posted an article praising the Johnson County Republicans for passing a resolution objecting to a state gas tax increase when better management and prioritization and a better governing statute can ameliorate the most serious road and bridge needs.

It is important to keep in mind that the references by tax increase proponents to thousands of “structurally deficient” bridges predominately refers to bridges that are not as wide as current standards. A high percentage of rural bridges may be only as wide as the traveled part of the roadway, rather than the shoulder, that should not be interpreted as meaning the bridge is about to fall down, which is what proponents would like you to believe.

Iowans for Tax Relief (ITR) sent an informative mailer out that we received Saturday.  It makes a number of points that need to sink in to dampen the disreputable crisis marketing used by tax eating special interests to promote more taxes. Key points include that Iowa has record high spending and that gas taxes are a heavy burden on low-income and working families. ITR offers three proposals as a combined alternative to raising taxes.  They can be viewed in the copy of the mailer we set forth herein or by visiting the ITR Website.

We also call your attention to the cartoon that is part of the flyer. It portrays how the lobbying system typically operates . . . claiming dire needs when there is already record spending, much of it nonessential.  We found it effective.

Note that special interest lobbyists never have the courage to call for reducing spending so that their “essential” project might be funded more easily. Rather they go for the tax increase (or deficit spending). To do otherwise  would pit them directly against other lobbying interests.  Legislators would rather buy into the dire needs narrative than do their job and make budgetary adjustments. That way they get the intense benefit of the special interest support, the cover provided by those interests by increasing public anxiety, and they avoid the intensity of opposition to any call for cuts to other programs or prioritization.  The taxpayers are a diffuse lot that can be trifled with or manipulated,  or so too many legislators think.   ITR seeks to end that presumption. 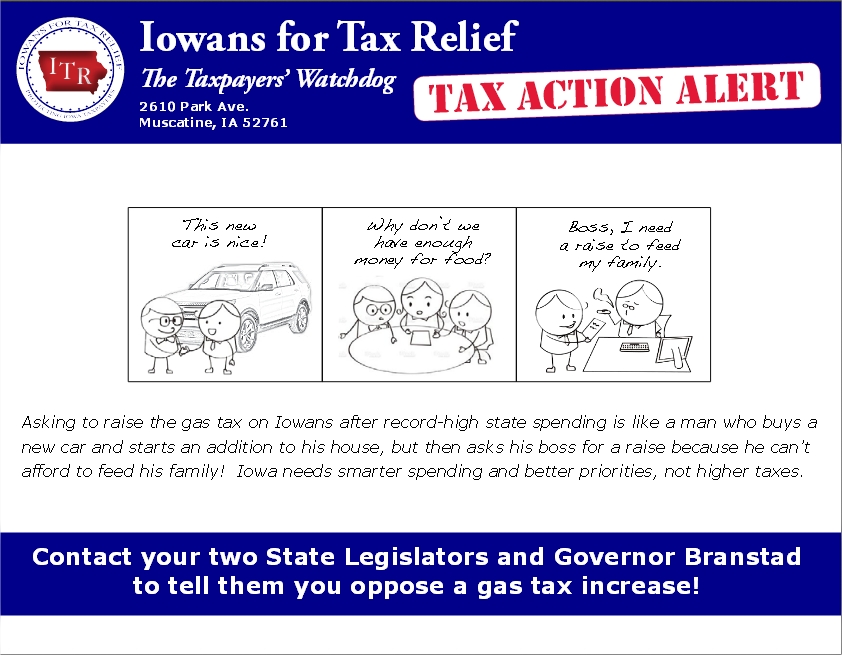 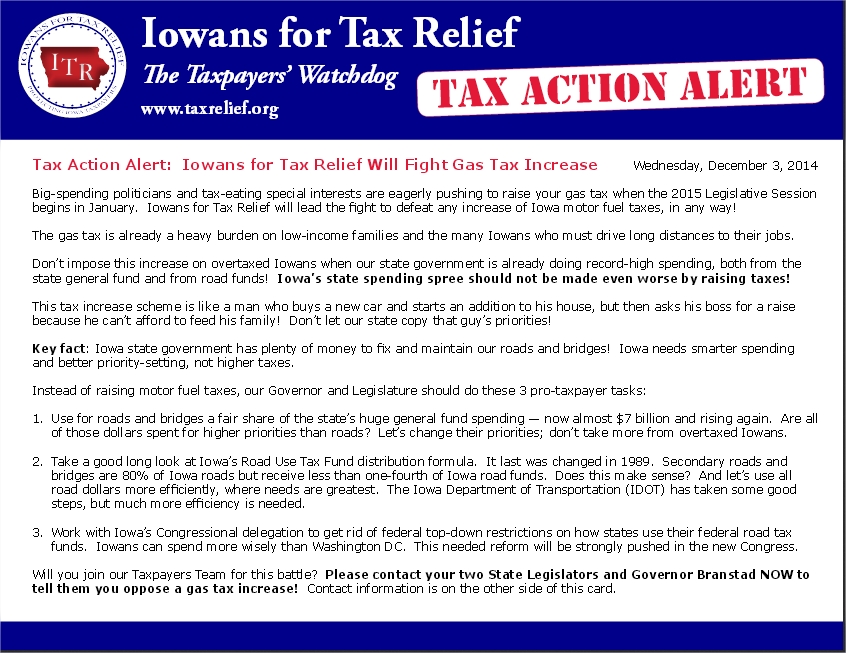 Click on graphics for expanded viewing.  Contact your state legislators via our convenient Legislator Link page on the page bar above.

Why the leadership of Scott County Republicans does not take a stand on matters consistent with Republican principles is beyond our understanding. There are  Republican Central Committee examples within the Scott County extended media market that do seek to educate the citizenry about timely matters and generate support for Republican positions (a service to Republican politicians trying to do the right thing) –  Rock Island and Johnson County are very recent examples. Instead Scott County “leadership” hides from issues and tries to make the party amorphous having gutted the platform to largely unspecific drivel.    R Mall