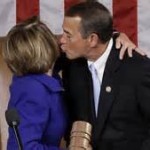 One for Fast Track 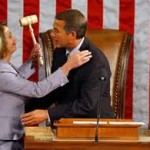 One for the little gambit on executive orders 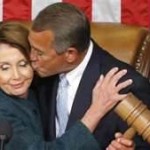 “Not now John, people are watching” 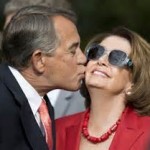 Oh for g*d sakes get a room!

Consider these excerpts from a Patrick  Caddell and Douglas E. Schoen article for Fox News a few weeks ago . While they are  Democrat analysts and pollsters they say much of what our ear to the ground reveals as well  —  on the street, listening to talk radio, and reading blog content and responses.  We do not agree with every aspect of their interpretation of the dissatisfaction with Republican leadership, nevertheless the entire article is commended to you.

In a recent poll of Republican voters supervised by Caddell Associates, Boehner held a paltry 43% favorability rating, while Senate Majority Leader Mitch McConnell fared even worse, with 38%.  . . . only 16% of Republican voters wanted both Boehner and McConnell elected to top leadership; 53% preferring neither or someone new. . . .

Republican leadership is even failing with fellow Republicans (in Congress). Just look at (the recent) . . . Department of Homeland Security (DHS) funding bill debacle, wherein Boehner had to depend on Democratic support to pass funding for the department. Only 75 Republicans voted with him—and those Republicans heard it from their base for having conceded the immigration. Rumblings are afoot about a conservative coup to unseat the speaker. And it is now Democrats who say they will protect Boehner’s speakership against a conservative revolt.

These voters wanted the GOP to make Obama’s pending order a campaign issue last fall. Indeed, the reason President Obama delayed his executive action until after the election was because their polling had found that the issue had turned toxic. A large majority of voters opposed the specifics of what the president was to do, and even larger majorities opposed the president taking executive action unilaterally. But the Republicans never confronted it, never  . . . never forced Democrats to take sides.

. . . they have failed to make a sustained political case to the majority of Americans who support them on immigration and ObamaCare – indeed not even on the Keystone Pipeline veto where a vast majority of all Americans supported the pipeline.

. . .  The Republican establishment leadership has no clue about its voters who are the most alienated and most anti-Washington in the electorate.  If they did, they would’ve adopted some of their voters’ core concerns in January, when they took possession of congress.

In this climate, an insurgent anti-establishment/anti-corruption candidate could clean up in the Republican primaries.  . . .

But whether it’s Walker next year or another candidate, someone needs to start carrying the Republican banner—in campaigns and in the political battles in Washington. Republican voters thought they’d elected such representation last fall. They’ve been bitterly disappointed. Expect to see consequences, and soon.

Now ruminate over this Politico article from yesterday .  Little GOP appetite for immigration fight on homeland bill   The subtitle:  Hill Republicans have all but surrendered the fight against President Barack Obama’s executive actions on immigration.

It is written with more than a bit of sympathy, cultivating the impression that while the Republican establishment in Congress tried mightily to thwart Obama’s amnesty executive orders, they are now resigned to being practical and doing the right thing, which they wanted to do all along, though beleaguered by conservatives in their midst and in the hinterlands.

Gut churning disgust was the result of our rumination as the article served up a chronicle of how the GOP capitulated step by step on Obama’s executive amnesty. It should humiliate McConnell, Boehner and the whole establishment crowd. These guys have no right to expect ANY electoral support from conservatives.

The betrayal these guys are willing to engage in is beyond the pale. It had to be planned even before they made all their campaign promises. Excerpts from Politico (our annotations in red):

A handful of GOP firebrands are still agitating to use Congress’ power of the purse to reverse Obama’s move to shield millions of immigrants here illegally from deportations.

But top Republicans say they’re not about to go there again: They tried that earlier this year with the Department of Homeland Security appropriations bill but were forced to capitulate on the eve of a department shutdown, having won no concessions on immigration. Better to let the issue play out in the courts, the GOP reasoning goes, especially since a judge has already halted the president’s November executive actions — at least for now.

Forced FORCED we tell you

But our rank and file are so stupid and unappreciative. Of course with an attitude like Carter’s the “we knew it” is, shall we say, a self-fulfilling prophecy.

With the GOP in control of both chambers, party leaders are determined to avoid no-win showdowns with the Obama administration. Democrats still control 46 seats in the Senate — enough to keep Republicans from the 60 votes they need to advance legislation and to keep leaders focused on measures that can win some bipartisan support. Another scorched-earth immigration fight risks more congressional gridlock, just as Speaker John Boehner (R-Ohio) and Senate Majority Leader Mitch McConnell (R-Ky.) hope to secure deals on trade, cybersecurity and Iran.

Looks like a win-win for Democrats.  Who is in control of congress again?

During a recent interview with POLITICO, McConnell suggested that in retrospect, he would have ended the DHS fight more quickly after seeing it would be a losing battle. He also stressed that Republicans would ultimately have to stake out some middle ground on government funding.

“What will happen is the bills will start out the way we like them. In order to move them, we’ll probably have to make compromises,” McConnell said, referring to the dozen of appropriations bills funding the federal government. “That’s the way the legislative process works when it’s functioning.”

Other Republicans, though, are calculating that it’s probably better for the executive action fight to play out in the courts, where the sweeping moves are on hold since a February order from a federal district court judge in Texas. The Obama administration has appealed the ruling by Judge Andrew Hanen; Justice Department lawyers have also asked the 5th Circuit U.S. Court of Appeals for permission to let the immigration programs proceed while the appeals process on Hanen’s injunction plays out. . . .

Some Republicans don’t like relying on the courts, because the case could ultimately end up in the hands of judges more favorable to the Obama administration’s view. But other GOP lawmakers see the current court battle, stemming from a lawsuit initiated by Texas and more than two dozen other states, as the best and most viable strategy.

And why?  Because Republicans capitulate and minority Democrats are steadfast.

Sen. Ron Johnson (R-Wis.), who chairs the Homeland Security and Governmental Affairs Committee, said there’s no need to use DHS as a vehicle for an immigration fight again. “I think the courts will decide in our favor,” he added.

“I think first we have to see what happens with the court case,” said Sen. John Hoeven (R-N.D.), who chairs the Homeland Security appropriations subcommittee in the Senate.

Translation – Absolutely make Obama’s actions fait accompli by saying you are anxiously waiting for the court’s sweet time while funding the inculcation of Obama’s actions regardless of the court test.

Nominations were another tactic for Republicans to use to retaliate against Obama’s executive actions, which would protect more than 4 million undocumented immigrants here from being deported, while granting them work permits.

But Loretta Lynch, who took significant fire over her comments offering a legal defense for the immigration actions, is now in place as attorney general.

Are you seeing the pattern here?

Sen. Ted Cruz of Texas suggested that Republicans block all Obama nominees, except for essential national security slots, until the president relented on his immigration actions. But few, if any, Republicans, agreed, and that strategy went nowhere.

Meanwhile, congressional Republicans could have filed their own lawsuit on immigration. Earlier this year, Speaker John Boehner (R-Ohio) began taking steps to authorize potential legal action against Obama. But House Majority Leader Kevin McCarthy (R-Calif.) indicated recently that because the executive actions were already being stalled by the courts, a separate lawsuit from the House GOP may not be needed.

“We’re still looking at it,” McCarthy said in a recent pen-and-pad with reporters. “We want to look at places that we can be helpful right now. But we’re achieving what we wanted to achieve there — stop an action that the president did not have the capability to do.”

How’s that again? They funded DHS without restriction with only a temporary injunction against some aspects. Nothing required them to fund any aspect of Obama’s objectionable executive orders.

And for now, there’s little desire for a renewed funding battle. Rep. John Fleming of Louisiana, one of the chamber’s most conservative members, said of fighting immigration through funding: “I don’t see the practicality of that.”   . . .

So you fund things you don’t like, that is quite the strategy.

5 Responses to Held in Contempt