Pope Francis’ PR gets ahead of him 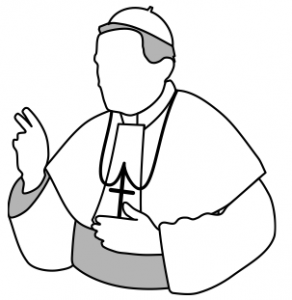 The Pope and his apologists say he is misinterpreted a lot. We have often said it is his responsibility to either be more careful issue definitive statements or shut the heck up.  No doubt he reads our humble little blog religiously, and therefore this article is intended to convey some matters for which clarification is in order. We are happy to raise the issues and provide the chance to set the record straight.  All the world-wide news agencies that monitor this site will dutifully transmit the clarifications we await. Our expanded Internet server capability is standing by at the ready to handle the intensity of the traffic.

So many times bitten but never shy

The Pope’s chosen namesake is Saint Francis of Assisi, who was renowned for being a friend of animals. But Breitbart reports something disconcerting in an interview the Pope gave to another publication:

Francis also had strong words for what is wrong with the world and the way people’s values get twisted.
According to the Pope, the worst problems in the world today are poverty, corruption and human trafficking. (Ed Note: that’s all the devil’s got?) He also expressed his astonishment when he read about what people spend money on. “After food, clothing and medicine,” he said, “the fourth item is cosmetics and the fifth is pets. That’s serious.”
In fact, for an “environmental pope,” Francis seems to think that people pay altogether too much attention to pets.
“Care for pets is like programmed love,” he said. “I can program the loving response of a dog or a cat, and I don’t need the experience of a human, reciprocal love.”

So our question is . . . after food clothing and medicine what is left?  Certainly housing would seem to be up there but that it is not listed must mean shelter is pretty cheap to rank below in cost to cosmetics and pets. Nevertheless, after the big three expenses, how much may ethically be spent on any one category of  surplus income? We are always getting these bon mots from Pope Francis but no guidance . . . pronouncements but no real direction.  Should we slaughter pets and give the meat to the poor, starve the pets and retain the feed for the poor,  or provide them the resultant left over cash?

Of course such would make not one twit of a difference to the plight of the poor  who are monumentally more victimized by collectivist, top down schemes than any resources devoted to pets.

Further, the world wants to know, if care for pets is programmed love what is reciprocal love? Perhaps the Pope meant to say some people have misplaced devotion, but most of the people I know who have pets, know the difference.  And by the way, shouldn’t pets get more resources than cosmetics?

Given his pet comments, there may be more convolutions in the Pope’s choice of Saint Francis of Assisi, the patron of the Franciscan order, as his name sake. It adds to the irony suggested by the traditional rivalry between Franciscans and Jesuits, the Pope of the latter Catholic religious order’s cloth.

It seems we cannot read about the Pope’s upcoming encyclical on the environment without hearing that he has a “masters degree in chemistry.” We were curiouss so we checked and we could not find a clear citation authenticating such a credential.  We think it was started and is often repeated by the usual suspects to lend credence to what are said to be the Pope’s beliefs alleging man has substantially caused alleged global warming. The weight of the Pope’s influence should he even appear to come down on the side of  policies that will make energy costs much more expensive because of what are bogus concerns will be devastating to the poor.  (See Moral Case for Fossil Fuels).

Man certainly causes localized pollution and countries and locals that do not insist on abatement need to do so. But that is really not what is at issue because there isn’t really any moral controversy and there would be nowhere near the level of concern about the Pope’s upcoming encyclical.Repeated references to a purported advanced degree in chemistry are not needed to be convincing about raw sewage and untreated industrial wastes. The issue is CO2 in the atmosphere, its origins and effects, and the authority others are placing in the Pope on a technical matter because of that supposed “masters degree in chemistry.”   Now for our money it would not make a difference if the Pope had a bonafide PhD in climate studies and was a practicing researcher on the matter of CO2 in the atmosphere.  The science still has to stand on its own, Papal endorsed or not.

So is it true?  Does the pope  have an advanced degree in chemistry ?  Or is it one of those things that has gotten ahead of the truth, widely repeated and useful for propaganda purposes, which the Pope has an obligation to correct, but for which no effort has been made to clarify with a simple statement?  To the degree we looked, of the many articles that parrot the assertion we had not seen an original citation.  When there was a cite, it was to another article without one, or one that cites another article without one. The assumption about the credential is wide as we have also seen it a number of times in reader comments to articles as well.

So the best we could do for our little investigation, without buying an English language biography, was  to go to a well sourced Wikipedia bio where we found this item:

He attended the technical secondary school Escuela Nacional de Educación Técnica N° 27 Hipólito Yrigoyen,[42] named after a past President of Argentina, and graduated with a chemical technician’s diploma.

That’s it. We are not positive of the parlance of academia in South America but one would think it easy enough and universal enough to say “masters degree” in any translation. It is not there.  What we do see is that after working for awhile in a food manufacturering lab he entered the seminary and subsequently obtained degrees and training that were ecclesiastically oriented.  By U.S. usage the passage indicates Jorge Mario Bergoglio graduated from a trade or technical oriented high-school before engaging in other pursuits. A bachelors or masters degree in chemistry is not indicated.

A brother of an editor to this publication who had a good high school science background worked in a lab at a local metals manufacturing company performing standardized tests on samples.  He did so while working his way through a college accounting program.  That work did not make him a theoretical chemist or metallurgist. In case the Pope does not respond directly, information offering a better understanding or references regarding the Pope’s chemistry credentials will be appreciated and passed on.

Return of the Italian ~ Papistry~

In a manner of speaking. While born in Argentina, Pope Francis’ parental heritage is 100% Italian. From the extensively referenced  Wikipedia article:

Jorge Mario Bergoglio was born on 17 December 1936 in Flores,[28] a barrio of Buenos Aires. He was the eldest[29] of five children of Mario José Bergoglio, an Italian immigrant accountant[30] born in Portacomaro (Province of Asti) in Italy’s Piedmont region, and his wife Regina María Sívori,[31] a housewife born in Buenos Aires to a family of northern Italian (Piedmontese-Genoese) origin.[32][33][34][35][36] Mario José’s family left Italy in 1929, to escape the fascist regime of Benito Mussolini.[37]

This is of significance to us in part because of the apologias regarding Pope Francis’ recent comments regarding PLO leader Mahmoud Abbas.  We previously dealt with the matter here and here.  The issue and controversy revolve around whether the Pope referred to KGB trained disinformation specialist Abbas as “an angel of peace” as reported by the AP, or was he advocating that Abbas “be an angel of peace” as reported by others. We agree that the differences in the two translations are significant. But it is also significant and undisputed that Pope Francis had previously called Abbas a “man of peace.” An inflection is said to be key to the accuracy of the “angel” translation. But that Bergoglio was raised by Italian parents and was also schooled in part in Rome suggests to us that he understood the difference.

Regardless the confusion in Christendom for those concerned about Israel and their negotiating position with the PLO was substantial. The imbroglio is Bergoglio’s making and could easily be cleared up with an approved transcription . We are not aware of any clarification from the Vatican.  Given the Pope’s influence and resources, the indifference to word meaning and clarification is unbecoming.

0
This entry was posted in ENERGY & CLIMATE, RELIGION AND GOVERNMENT, UNCATEGORIZED. Bookmark the permalink.

2 Responses to Pope Francis’ PR gets ahead of him