I agree with Alan Caruba that Obama lies about everything. I agree that Obama thinks the American people are stupid. Obama certainly has some evidence to support that…voters elected him, not once, but twice! 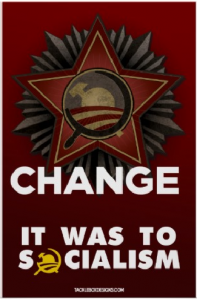 But I disagree that it is “ignorance” that is propelling Barack Obama’s agenda. And that agenda includes, as Caruba notes, not just the absurd “climate change” and his preferred “remedies” but his ham-handed remaking of America’s economy and its health systems and its foreign policy. While his entire agenda is most notably marked by abject failure in almost every measurable aspect, I contend that it is NOT because Barack Obama is naive or because of his colossal hubris.

I believe that for Barack Obama, those “failures” are not considered failures at all, nor should we, the American people.

Is there anyone who is not emotionally committed to Obama and liberalism who really believes that “climate change” is the greatest danger to the security of this nation and to the fate of the entire world?

Can Americans, not blinded by the indoctrination to liberalism they’ve experienced throughout their entire education, believe that the government should oversee the massive redistribution of wealth and the determination of how much an individual’s contribution to an employer should be rewarded?

I believe our constitutional republic has definitely reached the abyss, and because of that hope for the freedom in the world wanes.

I believe Obama is a committed Marxist. I believe he is not “childlike”, nor that he is ignorant or incredibly naive. I believe Barack Obama does indeed hate America and has always hated what this country has stood for. I don’t believe his contempt for America has been a result of his careful and thoughtful analysis or understanding of this nation and its system.

I believe it is a result of a lifelong indoctrination he has undergone by far left mentors, educators, and his handlers throughout his political journey.

I don’t believe Barack Obama has ever had an original thought. He has always been a captive of the people around him who have a deep dedication to Marxism and a profound hatred of the American ideal.

His ‘climate change” agenda is just an opportunity to advance a socialist/collectivist goal. His “concern” for the poor and inequality that he claims to agonize over is another chance to implement his desires for the massive transfer of wealth and the aggregation of more power to the central government.

His “foreign policy”, or lack of, is only another manifestation of his contempt for this nation and his willful intent to diminish its role in the world. Whatever consequence to national security which might result, is of no concern to him.

Finally, is Obama unfit to be president? On that I could not agree more with Mr. Caruba!

Ed Note: We want to emphasize the article Don linked to early on in his commentary.  It is by Peter Wehner writing at  Commentary Magazine and titled Counting Up Obama’s Cataclysmic Foreign Policy Failures. The reasons for Don’s comments about Obama’s relentless undermining of America’s place in the world are well reinforced.