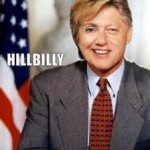 I don’t believe many Americans want to relive the Clinton years, each of us for our own reasons probably. But there is one aspect of the Bill Clinton presidency which should not be forgotten because it relates very directly to the coming  presidential election and this story in the Daily Mail recalls it in great detail.

The principal lesson in this sordid event is that it is a vivid, undeniable example of, first, what the Clintons are and what they represent of the current Democratic party. The second point is just as important:

It is this party which adopted as its motivating theme, the Republican Party’s alleged “War on Women”! This is perhaps the most blatant distortion of reality and daring example of “transference” a political party and a partisan media have ever attempted to foist on the American electorate!

Indeed, if there is a “war on women”, the Bill Clinton presidency is its Pearl Harbor, its Sinking of the Lusitania, and its assassination of Archduke Ferdinand, all in one!

And the current Democratic Party “favorite” to be its 2016 candidate was the co-producer of that whole sad saga of American history.

This story in the Daily Mail should be a reminder to the American people that there really is a “war on women”, and exactly who started it and continues to conduct it.       DLH