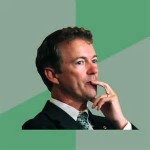 Rand Paul needs to get a clue — you can be known as the Republican candidate most reticent about foreign incursions without distorting history.  A path to the nomination is not likely from trying to ricochet through the process by trying first one message and then an arguably contradictory one while claiming consistency.

At recent campaign appearances, including yesterday in the Quad Cities, Rand Paul has been referring to  “Republican Hawks,”  alleging they have “been wrong on foreign policy for the last 20 years.”  His statement is wrong historically but also politically. The article we have linked to from The Federalist will highlight the historical error.  We would also refer readers to the many commentaries from historian Victor Davis Hanson. Regrettably for Rand, the reference to “Republican hawks” inherently encompasses any who supported Operation Iraqi Freedom (OIF) and Operation Enduring Freedom (Afghanistan).  Keep in mind his comments are about strategic justifications and not tactics, which hopefully go through correction and metamorphosis in war. While it took place more than 20 years ago, his statement directly implicates Desert Storm.*   From the Argus Dispatch report:

Sen. Paul said removing Middle East leaders — such as Sadaam Hussein in Iraq and Muammar Gaddafi in Libya — has produced volatility in the region. He suggested the U.S. should be cautious in hoping for Assad’s fall in Syria.

“We have to understand that, when we topple these secular strongmen, what happens is chaos,” he said. “Every time — and this includes not just Democrat wars, it has included Republican wars — every time we’ve toppled a strongman, it’s been replaced by chaos.”

“Hussein was the biggest opponent to Iran,” he said. “Iran is now bigger and more of a threat because Hussein is gone. Iraq is a failed state. Many describe Iraq as a vassal state for Iran.”

Apparently the good Senator forgets the invasion of Kuwait.  Maybe he thinks Hussein invaded to stabilize things there. The historic truth is that a coalition of forces, concerted opinion worldwide, removed Hussein from Kuwait. Having been defeated he accepted an armistice offered with conditions. The terms were clear. He violated them all including the WMD inspection mandate while also continuing to aid and abet terrorism.   Rand Paul glosses over those facts with the term “strongman” as if invasion, violation of terms of peace, threats and terror are mere internal foibles.  If one side refuses to abide by terms of peace then there is no peace. Hussein did not abide. That is the essence of OIF.  Read David Patten’s article in the Federalist for a fuller exposition of why Rand Paul is so off base.

Presidential Candidates Should Support The Iraq Invasion  subtitle:
We have every reason to believe the past 12 years would have been significantly worse with Saddam Hussein still in control of Iraq.

Perhaps Rand’s comments are out of desperation to kindle a fire in waning support from Ron Paul’s 2012 supporters. If press numbers can be believed (they appear to be supported by pictures of the event)  fewer than one hundred attended. The appearance was billed as a book signing event, but it was free and open to the public. Whatever the excuse to minimize expectations, the turnout was way off compared to that of Ron Paul four years ago and Rand has had far more media following him.

While we congratulate Rand for his efforts to amend the National Security Agency’s funding reauthorizations as regards bulk collection of phone records of American citizens, Paul’s statement to the attendees was a bit too swollen regarding the filibuster matter. According to the Quad City Times report

“My voice is still a little bit raspy. I spent about 10-and-a-half hours trying to protect your privacy this week,” he said, getting applause.

The short-lived filibuster was nine days ago.  As was reported and we commented at the time Filibuster or Farce, Republicans Mike Lee and Ted Cruz relieved him as did Democrats Wyden and others.

* We have avoided the term “First Gulf War.”   That war never ended as the terms agreed to were a conditioned armistice. Iraq under Hussein violated the terms and after many warnings an incursion by a coalition of forces to force the terms ensued.

0
This entry was posted in UNCATEGORIZED, WAR & FOREIGN POLICY. Bookmark the permalink.

1 Response to Rand Paul disappoints on facts and turn-out