As a Beatle once said, “Imagine…” 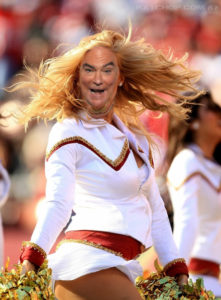 It takes all kinds to comprise the current “leadership” of the Democratic Party, but Tim Kaine is in a class all by himself.

When Tim Kaine yells “fight, fight, fight…” the image that immediately comes to mind is the Senator on the sidelines in a short skirt waving a pom pom.

But when he calls for his team to fight in the courts, “in the congress, on the streets” (he omitted “on the beaches”), he imagines himself as the reincarnation of Winston Churchill. 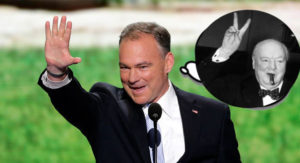 Hillary Clinton’s former running mate, says Democrats “are so excited that the American public is energized to speak out against the abuses of this administration,” and he believes it will work to their advantage.

He pointed to recent rallies in support of health care, in support of women, and against President Trump’s executive orders on immigration, saying Democrats must “take advantage” of the “tremendous public outcry.”

“What we’ve got to do is fight in Congress, fight in the courts, fight in the streets, fight online, fight at the ballot box; and now there’s the momentum to be able to do this,” Kaine told MSNBC’s “Morning Joe” on Tuesday.

1 Response to As a Beatle once said, “Imagine…”