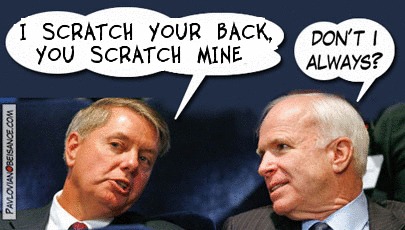 Graham-Cassidy health insurance bill is now said to be probably dead.  Perhaps lightening will strike, but that looks remote given the weakness in the weather pattern.

That the measure, with the possibility of subsequent legislation to improve it, will die in the crib  largely rests on a few Republican coffin bearers, especially John McCain and Mitch McConnell. That a “deadline” looms is not something inherent about legislation when politicians are there to do the people’s business, but it is “real” as forced by the likes of John McCain who would not vote to reinstate rules that Democrats found necessary to inaugurate Obamacare. Instead he enjoys a laugh and a back slap with the perps of the government takeover of healthcare and grave assault on our economy and freedoms.

And McCain enjoys empowerment from McConnell, who understands that insurance  companies oppose Graham-Cassidy after all, and McCain’s opposition is rather convenient on that score, for more than a few beholden Senators.

It may be McCain’s perhaps final major perfidy toward Republican conservatives, actually Republicans in general given the wide spread impact.  Having campaigned to end Obamacare, McCain is trying to nail up with all his mite coffins representing the potential end of Republican majority control of the Senate. That seems to be his real bipartisan goal,  except it will result in Democrat control and no bipartisanship from them.

McConnell is there to essentially help McCain swing the hammer as he chooses. Lisa Murkowski and Susan Collins, are two Roman Catholic US Senators (there are some others)  who would normally vote against anything that in anyway inhibits abortion coverage as Graham Cassidy purports to do. (They can nevertheless anticipate spring commencement speaker invitations at RC colleges and universities). Perhaps certain exemptions for their states would have carried their vote but that was /is not certain, indeed doubtful given their devotion to abortion on demand for any reason at any time.

That McConnell is spending millions in a primary in Alabama which will not impact the Graham-Cassidy vote shows he is more concerned with his personal hegenomy than moving legislation. An offer to Murkowski of such money as a bribe makes more sense, but better that it be held to help or induce a primary challenger to her and Collins down the road.

Rand Paul  as pointed out in an article below, in operating in his hypocritical purist mode, something he bounces back and forth from.

Of course it should not have come to this. Better bills than Graham-Cassidy that specifically remove and replace Obamacare are an obligation of Republicans. But just like the phrase –  “not our first rodeo,”  so it is not their first dereliction. At this stage the key question for conservatives is does the latest bill provide a significant move away, possibly opening up reform in the states, that will catch on, or is it better to let Obamacare fester for a better plan,  but then risk it being  inculcated, worse, risk single payer momentum because it was designed to fail?

While not sufficiently market oriented, Graham-Cassidy seems to at least incorporate more federalism, a key undermining of Obamacare.  Whether it does that sufficiently because of the infusion of DC bureaucratic over-site is a valid criticism which needs to be dealt with. That “vote buying” exemptions are said to be part of it is par for the course and arguably part of the cost of saving the country from Obamacare.

We can accept, with all the unpredictables and certain changes as called for below, that it is supportable. Opposition to it should be to improve it with all deliberate speed.  The Senate “rules” bringing the matter to the current cliff are BS and need to be done away with. Their hands are not tied.  Do what you were elected to do.

Headlines rang out to the effect that ~~ “Ted Cruz opposes Graham-Cassidy” ~~ , bandied about sort of as the last nail in the coffin and as if there was a big period at the end of the headline.  But here is the operative quote (bold emphasis ours):

Texas Republican Sen. Ted Cruz said Sunday that he does not currently support the Senate GOP’s latest bill to repeal and replace Obamacare, though he emphasized that he’s working with the sponsors of the bill in order to get to a “yes.”

There are problems with the bill. His statement is allowable.

(may not be “operative” now but provide insight into the momentum)

Lisa Murkowski is the key to Obamacare repeal and replace

If You Want Medicare For All, Get Used To Eating Rabbit Now
When socialism runs out of money and has no more free stuff to give, it wreaks havoc on a country’s economy and its people. Just ask Venezuela.

On the two critical questions—will it lower insurance premiums, and will it generate a system that works for states?—a textual analysis of Graham-Cassidy yields significant doubts.

As to the con articles, we support that changes should be made, but that the base concept of block grants is an effective approach, hopefully used to show the way,  if a more market oriented plan that allows for risk pools ,even if mandated or subsidized, is not presently in the cards.

A Health Care Solution So Simple, Even Congress Could Pass It

Lost in the political drama is why health-care reform legislation is so difficult to pass in the first place and why the solution to the problem, which is exceedingly simple, is being ignored.

Health care is too important for anyone in the debate to settle for a plan that imposes policies he or she fundamentally disagrees with. So why are Republicans trying so hard to accommodate one another? It would be far easier and much more advantageous for everyone involved to simply recognize that local governments are better equipped to deal with these issues than lawmakers in Washington DC ever will be.

Which states will end up the proverbial winners and losers under the Graham-Cassidy bill? The answer is simple: Nope.

Page 30 of the Graham-Cassidy bill, which creates a “state specific population adjustment factor,” completely undermines the rest of the bill’s funding formula: “IN GENERAL.—For calendar years after 2020, the Secretary may adjust the amount determined for a State for a year under subparagraph (B) or (C) and adjusted under subparagraphs (D) and (E) according to a population adjustment factor developed by the Secretary.”

In other words, if the secretary of Health and Human Services (HHS) doesn’t like the funding formula, he can change it however he likes. That’s a trillion-dollar loophole that leaves HHS bureaucrats with the ultimate say over how much money states will receive.

The bill does say that HHS must develop “legitimate factors” that affect state health expenditures—so it can’t allocate funding based on, say, the number of people who own red socks in Alabama. But beyond those two words, pretty much anything goes.

The bill says the “legitimate factors” for population adjustment “may include state demographics, wage rates, [and] income levels,” but it doesn’t limit the factors to those three characteristics—and it doesn’t limit the amount that HHS can adjust the funding formula to reflect those characteristics either. If a hurricane like Harvey struck Texas three years from now, Secretary Tom Price would be within his rights under the bill to cite a public health emergency and dedicate 100 percent of the federal grant funds—which total $146 billion in 2020—solely to Texas.

That scenario seems unlikely, but it shows the massive and virtually unprecedented power HHS would have under the bill to control more than $1 trillion in federal spending by executive fiat.

Top down provisions need to be fixed, but it is also important to undermine key aspects of Obamacare using the tools we have now, and that includes Tom Price.  If he moves quickly, he might put regulations in that will be onerous to change by subsequent administrations as states protect their territory. That is our hope.

Jimmy Kimmel Has No Clue What He’s Talking About