Slaver tree brought down by Trumps, Obama’s tried to prop it up

Story seems intended to imply that the First Lady wants the historic tree to be removed because it has been HISTORICALLY “compromised” because of the President Jackson connection.

“The overall architecture and structure of the tree is greatly compromised and the tree is completely dependent on the artificial support,” documents obtained by the cable news outlet read. “Without the extensive cabling system, the tree would have fallen years ago. Presently, and very concerning, the cabling system is failing on the east trunk, as a cable has pulled through the very thin layer of wood that remains. It is difficult to predict when and how many more will fail.”

More excerpts from WE article:

The historic tree was planted after Andrew Jackson’s inauguration in 1829. Jackson’s wife, Rachel, died after he was elected in 1828, and according to CNN, the former president wanted to plant a sprout from his wife’s favorite magnolia tree from their farm in Tennessee.

Former first lady Michelle Obama took a seedling from the iconic tree in 2009 and brought it to the Department of Agriculture, where it could grow at the agency’s garden, and former President Barack Obama gifted a seedling from the tree to the people of Cuba in 2016.

But then why not, the noted slaver was a Democrat, and the “roots” of slavery and Jim Crow are with his party — including the seedlings of ghettos and crime that riddle “the community”.

But Newsweek did a real number on Melania (posted via 70News blog).  We think our subject line at top is accurate. 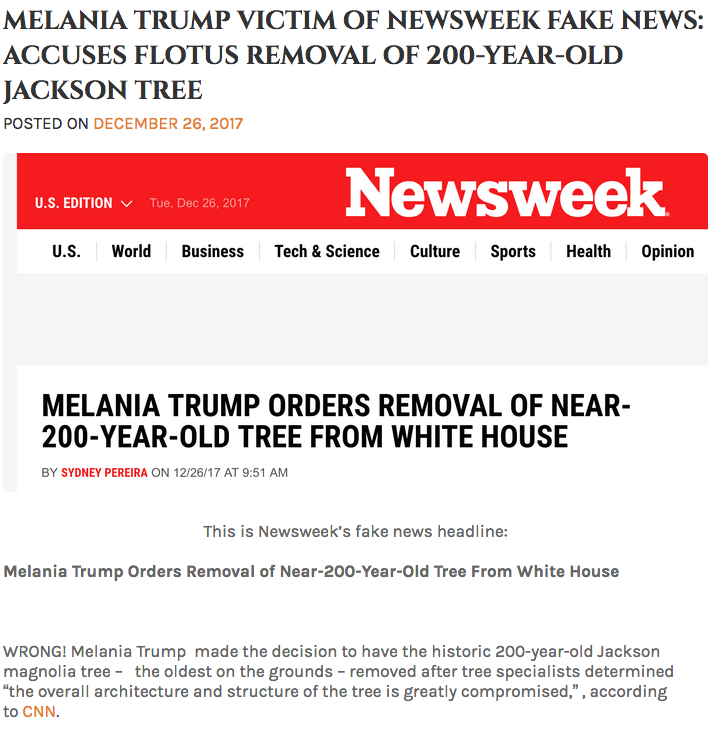