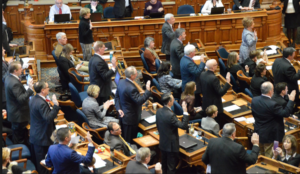 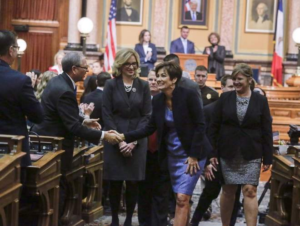 From Iowan’s for Tax Relief

Late Friday afternoon, Governor Kim Reynolds and Iowa House and Senate leadership released a summary of their tax reform agreement. From the details given, ITR is glad to say we support this plan because it is not just tax reform, it is tax relief!

In last week’s Watchdog, we shared the three principles we have been encouraging legislators to include in the final tax reform bill. These are:

This tax relief plan includes all three principles and when fully implemented will also:

ITR president Chris Ingstad said, “As we wait to see all the specifics included in the final bill, the details released will allow Iowans to keep more of their hard-earned dollars and make the state more competitive with other states. The strong voice of everyday Iowans was heard over the unending cry of special interests. For that, we thank Governor Reynolds, the Iowa House, and the Iowa Senate.”

Statehouse Republicans announced an agreement late Friday on what they described as the largest state tax relief and tax policy package in Iowa history.
The plan will provide Iowa individuals and small business owners $398 million in state income tax cuts in 2019, according to a joint announcement by Gov. Kim Reynolds and Iowa House and Senate GOP leaders. It will immediately provide an average tax reduction of nearly 10 percent and will continue to provide tax relief beyond 2019, officials said.

When fully implemented as soon as 2023, the plan will reduce the number of individual income brackets to four with a top rate of 6.5 percent. The top corporate rate will be lowered to 9.8 percent.

At full implementation, officials said the plan will have the following impacts:

A single taxpayer with no children making $25,000 will see a 22.3 percent tax reduction.

“This historic state-level tax reform — coupled with tax reform at the federal level — will bring significant relief to working-class Iowans in a fiscally responsible fashion that will allow the state to meet its budget responsibilities in the future,” Reynolds said in a statement.
Session may soon end

The announcement follows weeks of negotiations between Reynolds and House and Senate Republican leaders and should help bring a conclusion to the 2018 Legislature’s session in the near future. The session was tentatively scheduled to end April 17, but lawmakers have kept working as they have wrestled through differences on tax cuts and budget issues.    . . .

Objections to eliminating federal tax deductability and adding sales tax to internet sales have been based in large part on little or no confidence in overall reform that would on a timely basis  more than make up for the economic impact on taxpayers/consumers.  To be sure tax philosophy and principal were/are valid objections to various aspect of the current or reformed system but consistency can’t be in isolation because endemically in the tax code none really exists.  Tax codes are all largely hodgepodges of compromise, special pleadings and “optics”.  So we are content for now with overall relief, enhanced competitiveness for the state and the coupling with budgetary reforms as we continue to advocate for more consistency and especially simplification.       R Mall