We are all for more truth on trade 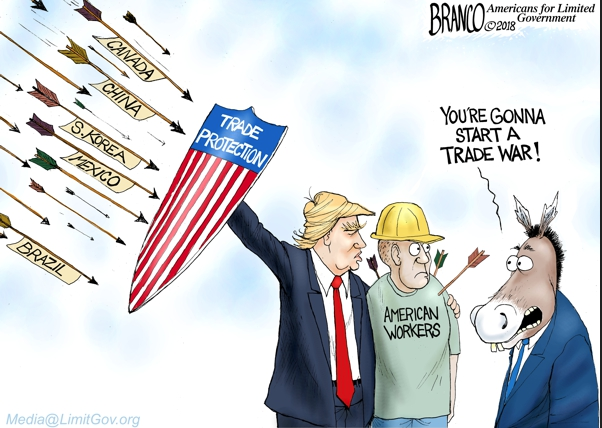 We generally like Veronique de Rugy’s economic commentaries at Townhall because at our core we don’t like the economic cronyism of government picking winners and losers and we fear  unconstitutional power assumed to do so.  As ethanol mandates are a bête noire of ours we much appreciated her article of just a few weeks ago  Is Ethanol Cronyism on the Ropes?     (our short answer response would be no even though any case for mandates is long expired) .   Then she came up with this, shall we say “incomplete of truth” critique of Trump’s trade policies (more a negotiating policy in our judgement).  We responded as follows but do read her rather doctrinaire defense of China’s trade policies as benefiting us and hurting them.  Telling the Truth on Trade With China

How about telling the whole truth?

Trump’s policies are about adjusting bad deals. The article states that the “best solutions use international organizations to challenge China’s actions and form alliances with like-minded allies.” That’s been done and is not off the table although we pray not as packed with either bad deals or crony deals for certain industries. But the admonition begs the question: Is one deal as good as another? Besides a scenario of herding cats at best the big agreements inextricably portend elements of one-world government. They involve serious loss of sovereignty, and intrusiveness. Is that the “free trade” doctrinaire free traders want?

And how does one inspire others to sit up and take notice about the benefits of less restrictive trade policies, maybe even create a situation where nations do lower tariffs to world wide benefit of peace, freedom and widespread abundance? Let the situation fester? Provoke no change?

China gets access to our markets, we don’t get access to theirs on an even keel and not unless we help create their competing industry and build the factories there?. The tut tut disclaimer by de Rugy about China being a horrible regime is gratuitous. China is on a track to consolidate internal and external power projection . . . but let’s endorse their trade priorities as if that serious nefarious reality is isolated from economics and world freedom.

As far as the willingness of American based multi-national companies (who only see themselves as the latter) to roll over on any matter for “market share” is not impressive to me as an American citizen. That some corporatist (capitalist is too good a word for them) would sell communist regimes the rope to hang themselves — and far worse, others — should not be compelling or an excuse for bad deals for America.

The article implies that China and the US basic industry (steel) situation is in isolation. China’s steel policy means that basic industries in third world countries languish. They can’t compete. But China doesn’t care (similarly fill in the country’s name and protected industry). They must be made to care.

Does that constitute trade war? Well Smoot-Hawley exacerbated problems, coming in 1930 it did not cause the Great Depression. A whole passel of precursors and other responses kept the depression going including especially encroaching government everywhere. Trump is moving overall toward less regulation and less taxes. And Trump is negotiating. Countries will see the error of assuming the US will be a patsy or a relief vessel to contain their bad policies.