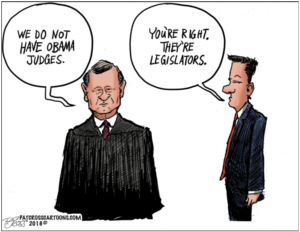 Bruce Bialosky writing at Townhall has a compelling rule change proposal to deal with federal district judges who purport to be interim Supreme Court justices and rule for the nation and also to ameliorate “forum shopping.” These could be accomplished by congressional act.

Here is a suggestion. If a federal judge decides they can omnipotently make decisions for the country and reverse or put on hold a presidential executive order or congressional law, the ruling must be reviewed by an appellate panel within a week. If the appellate panel decides to ride with the federal judge’s opinion, then the full appellate court must issue an opinion within two weeks. That would then go to the U.S. Supreme Court which would have a month to hand down a ruling or they could stay the action of the lower court and get to the full opinion at a further time. They could not just boot the decision without taking it up. If they don’t take it up, that would stay the decision of the lower court until they do.

The other cases not related to judge’s rulings to stop executive orders or congressional laws would continue to wind their way through the courts under the current process.

This would put an end to the benefit of forum shopping that allows a plaintiff the ability to put a stop to executive orders or congressional laws. These injunctions can eliminate actions with a time queue like the decision of the judge to limit the administration stopping the large groups flooding the border from Central America. By the time the decision is appealed the migrants are already in the country and absorbed into neighborhoods never to be seen again. It would also halt presidents from taking executive actions that are constitutionally questionable knowing they will not be properly reviewed for years.

Various states have need for similar reforms even as their processes can be quicker. Retention votes in the states are not adequate to solve related problems.  Critiques from law dogs, political science advocates and prognosticators, i.e. our readership, are appreciated.