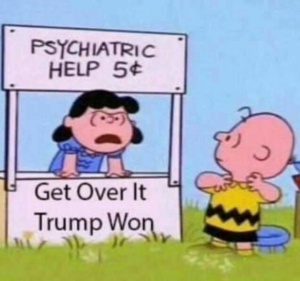 In our view the American Psychiatric Association somehow needs to keep people publicly associated with its “profession”(?) out of the media.

They tend to confirm what many of us believe. The people involved today in psychology, psychiatry, counseling, etc, with a few exceptions, need help far more than their unwary “patients” or “clients”.

We think it’s useful to present “side by side” reports from two different news organizations reporting on the same story.

In neither story, however, does the subject come out looking good. In fact both seem to amount to a call for the men in white coats to come and get this character. (Hats off to Duke Univ. for its sense of humor in showing the world the quality of mental health analysis, mixing with politics these days.)  DLH   Other of our comments follow.

Former Duke Psychiatrist Admits Trump Isn’t Mentally Ill, But ‘Go With It If It Will Get Him Out Of Office’

Former Duke Chair of Psychiatry Dr. Allen Frances admitted Sunday that President Donald Trump was not mentally ill, but suggested that if using that argument would get Trump removed from office, he would do it.

Frances appeared on CNN’s “Reliable Sources” with Brian Stelter to discuss what he felt were the dangers of declaring Trump mentally unfit — namely, he said, calling Trump “crazy” was an insult to people who do have mental illnesses.

“I think it’s very clear that he’s dangerous because he’s evil, he’s not dangerous because he’s mentally ill, and the mentally ill argument, if it would get him out of the office, I would say go with it even if it’s inaccurate,” Frances continued. “Anything to get this man out of office. But it won’t work, so piling on inaccuracy, stigma, the press will get people who know nothing about psychiatric diagnosis spouting off at the mouth, it won’t add to the discussion, it will distract from the political stuff and we have to focus on how evil —”

Stelter interrupted but did not push back on Frances’ willingness to lie to push Trump out of office. Instead, he said that he felt there was a need to “connect the dots,” adding, “There is something wrong here when he’s attacking his Federal Reserve chair, misspelling the guy’s name and doing 50 of those things a day. I’m kind of grasping for the language to use around this, but it’s —”

“I have — I think I have better language,” Frances cut in. “I think Trump is best characterized as a spoiled brat, as a baby having temper tantrums, as a completely unfit person unable to meet the challenges and the responsibilities of his office, as a con man, as a — the most narcissistic person maybe in our time and a narcissist for all times. All of these — as a thief. As a corrupter of others, as an obstructor of justice. These are terms that all make sense. Attributing every bad behavior that humanity is capable of to mental illness misses the point of evil and also stigmatizes the mentally ill.”

Dr. Allen Frances, author of Twilight of American Sanity, appeared on Brian Stelter’s CNN program Sunday to push back against a Yale School of Medicine psychiatry professor and several other mental health professionals who often appear on cable news networks to “diagnose” Trump from afar based on his frequently erratic behavior and public comments. Stelter was later ridiculed on social media for allowing Dr. Frances to claim “Trump is as destructive a person in this century as Hitler, Stalin and Mao were in the last century.”

On Sunday afternoon, Stelter blamed “tech difficulties” that kept him from hearing Dr. Frances’ comparisons to the murderous 20th Century dictators and apologized for not interrupting the controversial commentary. Several psychiatrists appeared on MSNBC and other networks Sunday accusing Trump of being a narcissist and a “successful sociopath” along with other negative mental health diagnoses.

“The first is it stigmatizes the mentally ill. I’ve known thousands of patients, almost all of them have been well-behaved, well-mannered, good people—Trump is none of these.”
“Lumping in the mentally ill with Trump is a terrible insult to the mentally ill and they have enough problems and stigma as it is,” he added. Stelter noted to a previous psychiatrist guest that she’d “never met” Trump in person.

“The second issue is calling Trump ‘crazy’ hides the fact that we’re crazy for having elected him and even crazier for allowing his crazy policies to persist,” Dr. Frances continued. “Trump is as destructive a person in this century as Hitler, Stalin and Mao were in the last century. He may be more responsible for millions of more deaths than they were. He needs to be contained. But he needs to be contained by attacking his policies and not his person.”

Several right-wing Twitter accounts and other pundits pounced on Dr. Frances’ claim, noting Mao, Hitler and Stalin were each responsible for the deaths of tens of millions of people, prompting the apology from Stelter Sunday afternoon.

Dr. Frances went on to say it’s only “crazy” not to tax the rich or to have Republicans block climate change legislation. (It appears to us that Dr. Frances is charging that all Trump voters are suffering from a “mental illness” for “not taxing the rich”! And that assertion is not a “terrible insult” to the mentally ill?)

“Discussing the issue in psychological name-calling terms distracts us from getting out the vote,” he added in the segment entitled, “Tiptoeing Around Trump’s Instability.”

“Donald Trump does have a fundamental psychological problem,” he said. “He needs to be loved all the time, he needs to have power over everyone all the time. Once you get that idea down, the rest of his behavior and his speech makes sense…He’s an extremely successful sociopath.”

Dr. Frances concluded the segment by saying Trump will “never be removed from office on the grounds of mental unfitness…that will never happen.”

Joe Biden: ‘I want to be clear, I’m not going nuts’

After months of gaffes on the 2020 campaign trail prompting even his brain surgeon to chime in and defend his mind, Biden made a pointed comment about the state of his brain over the weekend. “I want to be clear, I’m not going nuts,” Biden said during a campaign rally in New Hampshire — a comment that surely extended beyond the confusion he was trying to clear up at the time, the Los Angeles Times reports.

Biden made the declaration while speaking to supporters at New Hampshire’s Loon Lake, defending his inability to remember just where he’d spoken at Dartmouth College a few hours earlier. “I’m not sure whether it was the medical school or where the hell I spoke. But it was on the campus,” he said, looking at the gathered reporters as he did it, per the Times.

The obviously defensive comment comes after months of Biden stumbling over some pretty important details at campaign rallies, namely the locations of two mass shootings earlier this month. There’s also the time Biden said “poor kids are just as bright and just as talented as white kids” in front of the the Asian & Latino Coalition in Iowa. Yet the man who performed surgery on Biden three decades ago following two brain aneurysms agrees with the 76-year-old’s weekend comment, saying that he’s clearly “as sharp as he was 31 years ago.” Kathryn Krawczyk

Questions for the good Doctor Frances:

Has any President not been characterized by their political opponents as evil or a narcissist?

If Trump did not respond to the calumny and mania and real malice aimed at him, such extreme (in context) apathy in the face of such real harm to himself but also his family and supporters, would that not just as glibly be characterized as schizophrenia?

How would you respond to torments and evil coming from your opponents?

Oh, we see, evil is in the eye of the beholder

What is more narcissistic than seeing evil in others but not yourself, a characteristic of Trumps accusers?

What percentage of sociopaths are Democrats?

Don’t take it personally but you are a nutcase.   R Mall